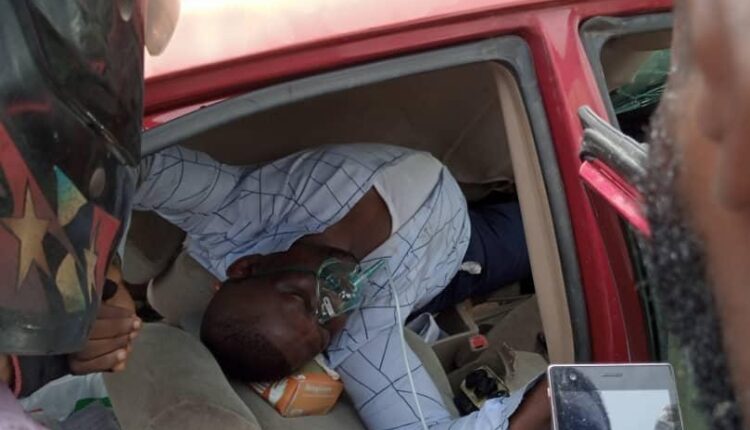 A health worker identified as Dr. Tolulope has escaped death by a whisker on Friday after multiple accidents that left other motorists scampering for safety around Stadium Bridge, inward Barracks area of Lagos State.

As gathered, the accident was said to have involved a truck laden with two 20ft containers and a red Toyota Corolla with registration number APP745 DP.

The Guild gathered that the incident was caused by a mechanical fault from the truck which lost control while moving at high speed.

According to him, the driver – an adult male who sustained a severe leg injury was quickly extricated and attended to by the agency’s paramedics at the scene alongside Lasambus before being moved to a nearby hospital for further treatment.

“The victim, Dr. Toluope was taken to Havanah hospital for further care. However, the truck and the Car had been recovered off the road with the aid of the Agency’s heavy-duty equipment (Goliath) for free vehicular activities and handed over to the Nigerian police at Area C. Operation concluded Agency’s LRT heading back to base

“Dr. Tolulope is a staff of Havana Hospital which is located in Surulere, Lagos. As of 10 a.m last follow-up this morning, he is reported to be “doing well”. Responding well to treatment, checked for internal injuries, bleedings among others. He was certified “stable”.” he said in a statement released to journalists.