Activities around Danukofia Local Government in Anambra State were brought to a halt when gunmen stormed the community and set ablaze the Nigerian Police station, destroying vehicles and other facilities of the law enforcement agency.

As gathered, the attackers, who were said to be 20 armed men, razed offices and operational vehicles of the law enforcement agency parked within the police stations.

During the attacks on Zone 13 Police Command Headquarters in Ukpo, eyewitnesses, on Monday, narrated that the yet-to-be-identified gunmen were said to have shot sporadically in the air before attacking the police facility during the onslaught.

Our correspondent learnt that a stiff resistance from officers on duty prevented the attackers from gaining access into the division armory department to cart away ammunition.

In a related development, gunmen also stormed the Uzuakoli police Division in the Bende council area of Abia State and razed down the facility during the early hours of Monday.

Our correspondent gathered that the attackers also freed detained suspects before setting the facility and other vehicles parked in the station ablaze. 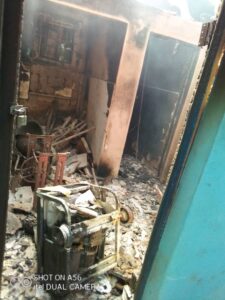 Confirming the development, the Anambra State Police Commissioner, CP Kuryas Monday, said that operative attached to the Zonal Headquarters repelled attacked by criminal elements that stormed the facility during early hours of Monday.

According to him, the attackers who came in their numbers shooting sporadically in order to gain access to the facility were repelled by police personnel on duty who showed profound gallantry in the face of the seemingly overwhelming attack.

Through a statement by the Zonal Headquarters Public Relations Officer, Nwode Nkeiruka, the police boss said that the attackers used petrol bombs and Improvised Explosive Devices (IEDs) on vehicles within the facility after they could not gain access to the station.

“One of the criminal elements was neutralized during the exchange of gunfire between the Police and the attackers while many of the gang members escaped with gunshots injuries.

“One L7A2 General-Purpose Machine Gun (GPMG), Ninety-two rounds of 7.62mm live ammunition, one locally-made smoke pistol and an axe were recovered by the Police. Regrettably, two police operatives sustained gunshot injuries and are presently receiving treatment,” the commissioner was quoted as saying in the statement.

The police boss further disclosed that he would personally lead a special operation aimed at tracing, identifying and arresting the perpetrators to bring them to book.

He also called on proprietors of private and public (including unorthodox) medical facilities in and around Anambra state to admit, but report anyone found seeking medical attention for bullet wounds and related injuries to the nearest police station.

While assuring the command’s resolve to re-dominate, reclaim and secure all public spaces as directed by the Inspector General of Police, Monday enjoined residents to continue to support the police with vital and timely information on the activities of criminals and other subversive elements within their respective communities.