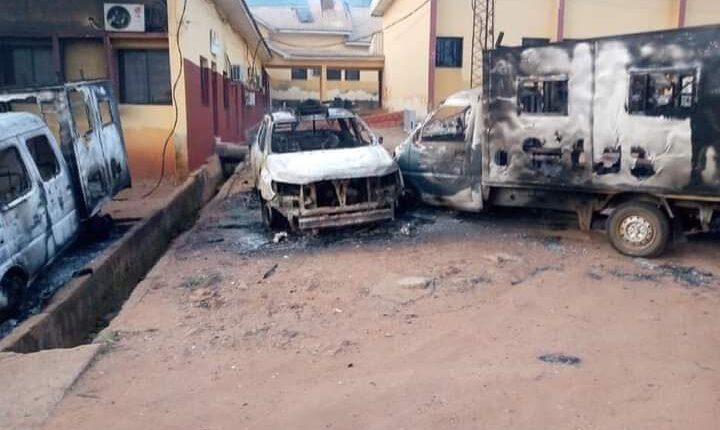 Share
A magistrate court and Secretariat of Idemili North Local Government in Anambra State were reported to have been razed by some gunmen, barely two days after state governor, Chukwuma Soludo, visited leader of the Indigenous People Of Biafra (IPOB) leader, Nnamdi Kanu, to discuss solutions to kidnapping and other criminalities across the region particularly within the state.
Aside from the structures wreck, the gunmen were also said to have set the vehicles within the premises ablaze during the attacks on both facilities.
As gathered, the gunmen stormed the premises yesterday night and overpowered the security officials before they burned down the secretariat and the court with all documents in both.
Pictures and videos obtained by newsmen showed that the entire buildings were reduced to rubbles, while vehicles parked inside the Local Government secretariat were also burnt to ashes.
The State Police Command has also confirmed the development, attributing it to unidentified arsonists and that efforts were already ongoing to arrest the perpetrators.
According to the command spokesperson, DSP Toochukwu Ikenga, “Yes, the incident was confirmed, and our men were there to restore normalcy in the community.