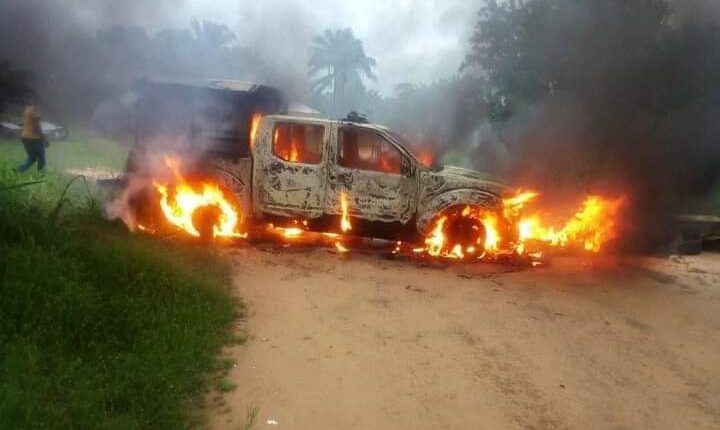 Atleast one policeman has been confirmed to have been killed and a station and vehicles set blaze when gunmen attacked a community in Akwa Ibom State.

As gathered the gunmen, who were armed with AK 47 Rifles and other dangerous weapons, in two vehicles, attacked the rented building housing the Etim Ekpo Area Command and Division at about 6:30 am.

Few minutes after the gunmen arrival, the law enforcement agency personnel fought back, repelled them, and averted the intended carnage but during the face-off, an officer, Edogi Bassey, was hit by a bullet while a small portion of the building was touched.

Confirming the attack, the Police command spokesman, Odiko MacDon, in a statement on Wednesday, disclosed that the “gunmen who proceeded to Ika Division to perpetuate their nefarious activities were successfully again repelled leaving the Station intact without loss of lives or arms”.

The statement reads: “To forestall the attack, the Commissioner of Police, Amiengheme Andrew, has commenced tour of formations and Divisions  to ensure alertness and safety of Officers”.

He appealed that the residents to volunteer timely information that would enable the Police to tackle the present security challenges particularly preventing attacks before they occur in the state.