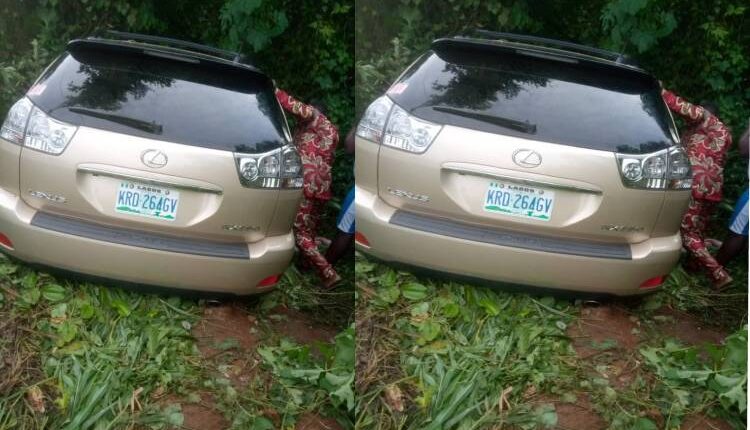 Atleast one person has been reported killed and three others abducted by gunmen that attacked their Sport Utility Vehicle (SUV) in Ido-Osi Local Government Area of Ekiti State.

The body of the deceased, identified as the driver, was found at the spot where the vehicle with number plate: LAGOS- KRD 264 GV was attacked between Ewu-Ekiti and Aiyetoro-Ekiti, neighbouring communities in Ilejemeje and Ido/Osi Local Government Areas of the state.

Although identities of the victims were yet to be ascertained, it was learnt that they were whisked away to an unknown destination while the vehicle said to be conveying the four occupants including the deceased driver was left at the scene.

Eyewitnesses said that the victims were some of the guests that attended a Ceremony in the area and that they were returning to their destination when the gunmen, who were said to have trailed them from where they had gone for the event, attacked and killed one.

Confirming the tragedy, Police spokesman for the state command, Sunday Abutu, on Saturday told newsmen that the attack occurred yesterday and that only two other occupants of the vehicle were whisked away as against eyewitnesses claims.

Abutu hinted that the police, in conjunction with local hunters and operatives of Amotekun Corps, were already combing the forest around the area to rescue the victims and arrest the gunmen.

The attack came barely four days after gunmen also suspected to be herdsmen shot and killed farmer, Ademola Afolayan, in Ikere-Ekiti on Monday, Aug. 2 at about 5 p.m.

It was gathered that the gunmen, numbering about five, invaded the farmer’s poultry sited at Eselemo Farm, Igbo-Oka area, shooting sporadically and in the process, killed Afolayan.

Also, Ekiti State former Chairman of the National Union of Road Transport Workers (NURTW), Clement Adekola, escaped death by the whiskers when his vehicle was attacked on Tuesday, Aug. 3, also at about 5 p.m.

The gunmen were reported to have shot at Adekola’s vehicle while travelling along Ikere-Igbara Odo Road, in Ikere Local Government Area of Ekiti State.