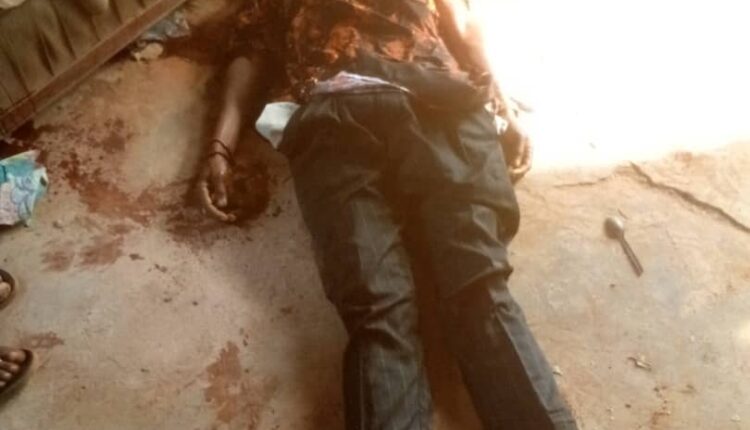 Atleast three persons have been reported killed by gunmen that attacked the home of the Peoples Democratic Party (PDP) House of Representatives candidate for Ideato North and South Federal constituency, Ikenga Ugochinyere, in Imo State.

Among victims of the attack that lasted for several minutes in Akokwa Ideato North Local Government , was the uncle to Ugochinyere, who was identified as Dan.

Aside from the victims, the gunmen also set ablaze several vehicles parked within home of Ugochinyere, who is also the spokesperson for the Coalition of United Political Parties (CUPP).

According to Ugochinyere in a seemingly distressed message on social media on Saturday, said: “We need help in Akokwa Ideato North Local Government Area, Imo State. My uncle has been killed now. They are setting everything on fire. Please help”.

In a video footage obtained on social media, bodies of victims were seen on the floor, burnt houses, and campaign materials at Ugochinyere’s country home.

From the video, a man who was narrating the incident, said several vehicles had been destroyed, and Ikenga’s house razed.

Earlier, the National Co-Spokesman for CUPP, Mark Adebayo, had alleged that his colleague’s house was surrounded and being shot at while he and his supporters were under serious gun attacks.

Mark claimed that he has received several text messages from his colleague and calling on all security agencies to rise in protection of his colleague.
“I have received disturbing texts from my colleague, Ikenga Imo Ugochinyere, that he and his supporters are under attack and his house being shot into and about to be set ablaze.
“Nigerians would remember that an aide to the incumbent Imo state governor recently threatened Ikenga for which the latter raised alarm about his safety. One would have expected the Police authorities to invite the persons involved and thorough investigation carried out with a view to arresting and prosecuting the culprit but nothing like that has happened. As I speak, I can’t reach my colleague again after sending those desperate messages “
“Should anything happen to Ikenga Imo Ugochinyere, we shall hold the Imo state governor and his aides responsible for it. I’m immediately filing an official petition with the international community on this dastardly development which I condemn in its entirety and I call on the IGP to send in his men to rescue my colleague and his people immediately. Every second counts now”.

“The PDP in Imo State alerts that, at the moment, there is a well-coordinated armed attack going on at the Akokwa residence of Ikenga Ugochinyere, the candidate of our party for Ideato North/South Federal Constituency.

“This has resulted in the killing of undisclosed number of persons. Also, buildings are reported to have been set ablaze.

“Our efforts to get back to our candidate, Ugochinyere, who was present at his residence when this attack began and who had personally alerted us to the attack, has proven abortive. However, a torrent of messages, a while ago, from Ikenga’s close aides bore some deeply pathetic lines like: “Everywhere is on fire! They are killing us! We are going!”

“Imo PDP calls on security agencies to immediately intervene and quell the attack on our candidate and our party members at his residence in Akokwa.

“Nigerians and international community are to recall that on December 23, 2022, there was an attack on the convoy of our candidate by clearly-identified agents of the Imo State Government. It is shocking that despite our demand for the arrest and prosecution of those involved in that onslaught, nothing has been done by security till this moment.

“Today represents a dark day for us in Imo PDP and Imo State at large.”