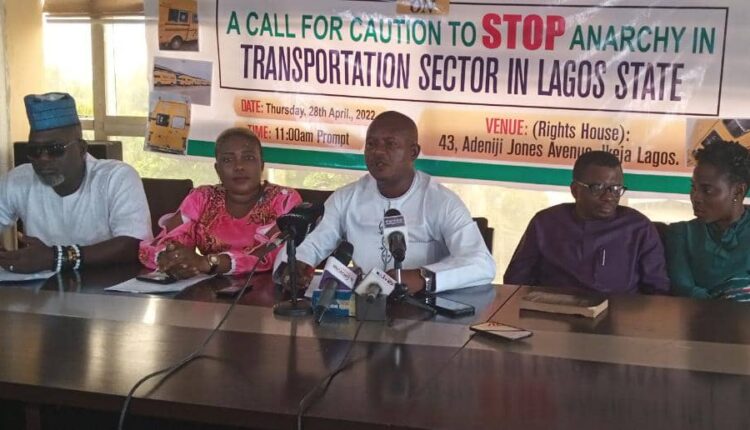 Following ongoing leadership crisis between members of the Lagos Parks Management Committee and the Tricycle Owners and Operators Association of Nigeria (TOOAN) as well as National Union of Road Transport Workers (NURTW), the Centre for Human and Socio-Economic Rights (CHSR) has issued a seven-day ultimatum to the State Government, to address the issue and restore peace across commercial transport operation across the state.

CHSR said that within the seven days, it is expected that the state government would have been able to discover a solution that would bring an end to the crisis that had halted peace and harmony that had existed for several months across the state.

During the seven days, the group stressed that they expected the government should have retraced its step by inviting all stakeholders in the sector and addressing whatever personal and general differences they have against one another.

Also, it said that the Lagos State House of Assembly should convene another emergency plenary that would give not only the stakeholders in the sector but also provide a platform for members of the Civil Society Organisation (CSO), in other to fashion out reasonable solutions on the crisis rocking the sector before it degenerates.

Aside from that, the state government should within this period reconstitute the park management committee to incorporate other critical stakeholders in the transportation sector, particularly members of other factions in the state.

It noted that if the government refused to address the issue within the stipulated window, the group would have no other option than to approach the court to seek the appropriate redress immediately.

Speaking on behalf of the group, President of CHSR, Alex Omotehinse, said that they have received several reports from Lagosians, raising concerns that the peace in their community has been truncated completely.

Addressing pressmen on Thursday at Right House, Ikeja, Omotehinse urged the governor to yield and address the issues raised to avoid anarchy across state since the peace that existed before had been tampered following the appointment of Musiliu Akinsanya popularly called Chairman and 25 others as members of the Parks Management Committee.

The president noted that the composition of the parks committee by the governor and his aide on transportation was at variance with the Lagos State Parks and Garden Authority law.

According to him, the committee lacked fair representation of critical stakeholders, hence the reason for the unrest in some parts of the state which had resulted in destruction of property worth millions of naira.

“Our interest is peace in the state. Peace must be in Lagos. If there is no peace there will not be progress. We are not speaking for any transport unions, we are speaking on behalf of the residents.

“Many road users and pedestrians have become victims of the hooliganism and attacks by some members of these transport unions. During the attacks, innocent residents have always been the victims of circumstance,” the rights activist said.

“According to section 12 of the Act, there shall be a general manager who will be the chief executive officer and to be responsible for the general administrative and day–to-day activities of the park management with five other members.

“But the committee as composed is alien to the law of the state. Where in the Act, as constituted and signed by law, is the provision for executive chairman and governor liaison officer? In between April 19 and April 23, over 1000 transport vehicles were vandalised and a Rainoil filling station was attacked.

“Lagos residents have started witnessing pockets of violent activities within Lagos state metropolis in areas where the parks management committee have encroached and forcefully taken over, which ought not to have arisen.

“The State government should re-trace its steps by calling both the NURTW National body, the suspended Lagos State council chairman MC Oluomo and all the stakeholders in the transportation sector for a genuine dialogue in order to make an amicable resolution in the interest of peaceful co-existence.”