EFCC holds back bitcoin vendor, four others for internet… 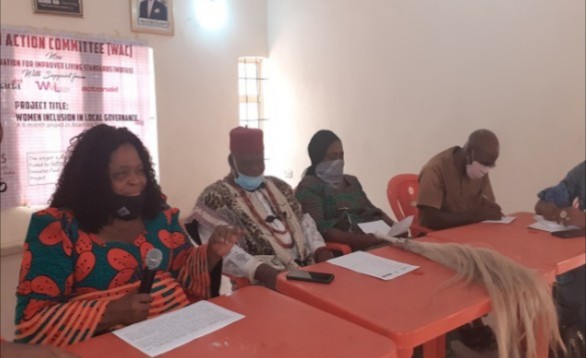 Ahead of the November 6th gubernatorial poll in Anambra State, a gender right group, the Women Foundation for Improved Living Standard, has urged traditional rulers to support and promote women’s political empowerment in the state.

It said that the proximity of traditional rulers to the people placed them in a unique position to communicate and ensure that more women responded to the call for political participation within the state.

The group’s Executive Director, Prof. Mercy Anagbogu, made the call during a meeting to evaluate the success recorded in the ‘Women Inclusion in Local Governance’ project at Nwagwu in Dunukofia LGA, a project which took off last year was supported by ActionAid Nigeria and funded by Global Affairs Canada through Strategic Innovative Fund.

Anagbogu argued that women were often excluded from their rightful place at the political table and that it affects the opportunity to get political parity with the male, unless more women get involve to compete favorably.

“From our findings, I’m happy that this programme has triggered attitudinal change and motivated many grassroots women to begin to aspire for political participation in the upcoming 2023 general elections.

“To succeed in all of this, we would require the support of our traditional rulers to help amplify the quest for women’s political empowerment and inclusion in local governance.

“This is because women have a very very critical role to play in the growth of Anambra and the Nigeria society. So, we need to mobilise and Support them,” she added.

Also speaking, the Traditional Ruler of Nawgu Community, Igwe George Okaa-Onwuogu, urged women to go register with the political parties of their choice to enable them to have platforms to contest in elections.

While appreciatibg the group for their efforts, Okaa-Onwuogu promised his continual and efficient support to ensure the realisation of the group’s objectives through effective and efficient collaboration.

He also appealed to governments at all level to appoint more women into positions to enable them to contribute their quota towards societal growth, saying that many women had proved their worth when challenged to do so.

In her remarks, a Legal Practitioner and politician, Bibian Nwankwo, called for unity among women toward making the state a better place for all.