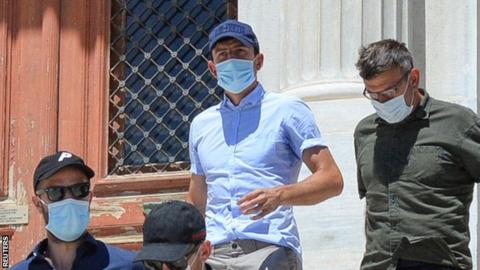 A Greek court has released England defender and Manchester United captain, Harry Maguire, after pleading not guilty to all charges leveled against him by the prosecutors after been arrested for fighting along with two other Britons in the country.

The court has fixed next Tuesday, August 25th, for hearing on three allegations leveled against the defender, aggravated assault, verbal assault, and the most serious one, the attempted bribery of an official.

As gathered, it is unclear which of these charges specifically pertain to Maguire and which to the two other men, it could be as much as a three-year prison sentence for attempted bribery.

He was arrested on the island of Mykonos after having an altercation and an exchange of words with three policemen who also appeared before a prosecutor on the nearby island of Syros.

Maguire was in court on Saturday for around an hour testifying to a prosecutor, where he denied all charges, and it is understood the trial has been adjourned until a hearing next Tuesday, however, the three defendants were not obliged to attend the trial and are free to return home.

Although the 27-year-old defender left the courthouse in an unmarked van, refusing to make any comment or statement on the incident, his lawyer told newsmen that the player was free to leave the country.

Speaking from the scene, Kelner said: “Unfortunately the only people who know what happened in that courtroom are Harry Maguire, the two people he was co-defendants with, and of course the prosecutor and his defense lawyer.

“The legal system here is rather opaque. These hearings are not open. Journalists are not allowed in. As a consequence of that, the details of what went on inside there and what the eventual resolution was, if there was any resolution, is still unclear.

“It seems there may have been an agreement, according to Greek media reports – that Harry Maguire returns to the island of Mykonos, which is around a 50-minute boat ride from here, to apologise for what took place there on Thursday night in order for him to return to England.

“I was also speaking to someone on the ground here, and he was saying Harry Maguire has to return to the courtroom on Tuesday. But there is a chance, that hearing if it does have to happen, goes ahead without the Manchester United defender.”

A statement released by the Hellenic Police’s South Aegean region press office on Friday afternoon read: “Patrolling police officers in the area of Mykonos intervened and normalised a dispute between citizens.

“However, three foreigners involved in the incident turned against them, insulting and hitting a police officer with fists.

“The three foreigners were taken to the Mykonos Police Station, whereupon their arrival they strongly resisted, pushing and beating three police officers.

“One of the detainees then tried to offer money so that the trial against them would not be completed. The arrested (men) were taken to the Syros Prosecutor’s Office.”