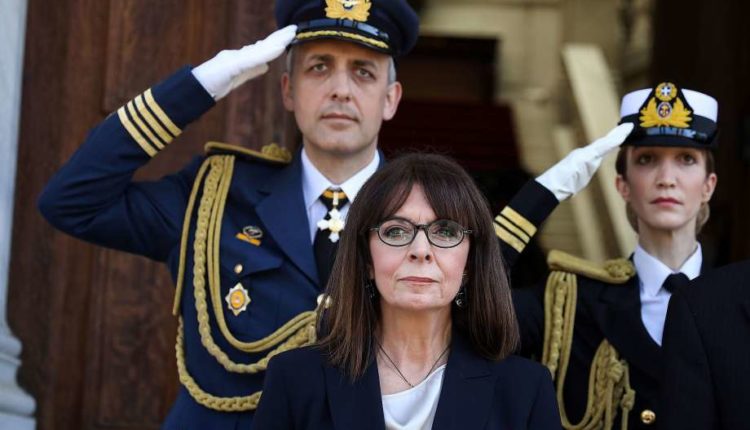 Greece’s first female president, Katerina Sakellaropoulou, has been sworn in a scaled-down ceremony due to the coronavirus outbreak that had ravaged Europe lately.

Sakellaropoulou was welcomed at the parliament by Prime Minister Kyriakos Mitsotakis and Parliament Speaker Konstantinos Tasoulas on yesterday morning.

Political parties were represented only by their respective parliamentary group heads, with the event being covered by a limited number of journalists. And instead of the traditional 1,000 people, only 120 were invited in the ceremony.

Sakellaropoulou, who will be the country’s first female president, took over her new role from her predecessor, Prokopis Pavlopoulos.

She is the eighth Greek president since democracy was restored with the fall of a ruling military junta in 1974 and the 13th president in the history of Greece.

In her inaugural statement, Sakellaropoulou urged compliance with health authorities’ directives to stem the spread of the virus, according to Greek daily Ekathimerini.

“We are called upon to tackle the coronavirus pandemic as a priority,” she said, according to the newspaper.

“It requires full compliance with the instructions and full implementation of the precautionary measures to prevent further transmission of the virus,” she added, underlining that the COVID-19 was a “real risk for the elderly.”

As the first female president of the country, Sakellaropoulou also said she hopes her election would bring further equality for women in both “family and society,” and also prevent “obstacles simply for being born women.”

She also served as a member of the Central Legislative Bill Drafting Commission in 1993-1995.

Sakellaropoulou was president of the Disciplinary Board of the Ministry of Foreign Affairs in 2013-2015. Since March 2015, she has been president of the Hellenic Society of Environmental Law, a scientific association.

While reaching on the increase in asylum seekers, Sakellaropoulou also commented on the ongoing crisis at the Turkish-Greek border as asylum seekers try to enter Europe through Greece.

“We must safeguard our borders while fulfilling our humanitarian duty to people who are suffering […] It is a difficult but not impossible equation,” she added.

Late last month, accusing the EU of failing to uphold its half of the 2016 migrant deal and warning of a million more refugees in Idlib, Syria poised to cross its border, Turkey stopped trying to block asylum seekers from reaching the Greek border by land.

The Greek reaction to asylum seekers has been harsh, with thousands battered, attacked, or tear-gassed by Greek forces, and several killed.