Wole Soyinka to Buhari: Your administration has attained… 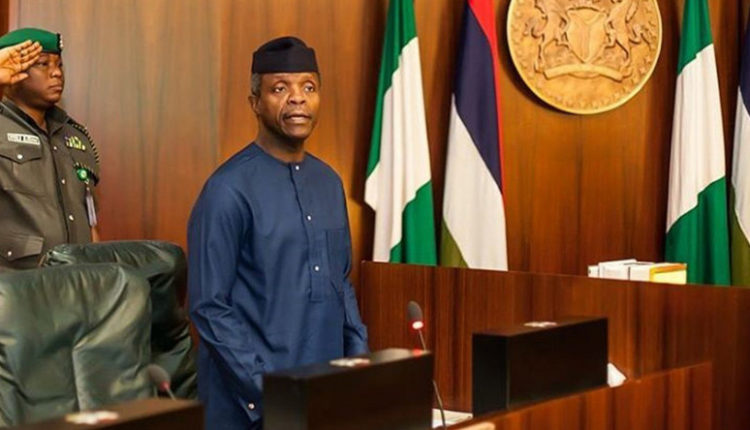 Vice President Yemi Osinbajo, has said that the greatest value for jobs and improved productivity lies in the agro-allied value chain.

Osinbajo said that the central question especially in the public sector was not the lack of talent or well researched policies but the weakness in implementation, adding that the implementation of policies and programmes to address the challenges of poverty and wealth creation, jobs for millions of young people required collective thinking and action.

Osinbajo made the assertion while declaring open the 2019 Annual National Management Conference of the Nigerian Institute of Management (Chartered) on Monday in Abuja.

The theme of the conference is, “ Managing the Challenges of Democracy.’’

According to him, the Federal Government has created appreciable value in agriculture, with the Anchor Borrower programme by adding new jobs and acreage in paddy rice, sorghum, millet, cassava and yams.

“But we recognise that it is in the agro-allied value chain that the greatest value lies for jobs and improved productivity.So a crucial component of that is our mechanisation of agriculture programme with the Brazilian government where we intend to build service centers in every local government to render extension services, leasing of farm equipment, provision of improved inputs.

”In addition to that there will be six assembly plants for tractors and other equipment. The enhancing of commerce in agriculture by the building of rural roads for access to markets and commodity exchanges are also priority items,” the vice president said.

“The expansion of opportunities in manufacturing with the completion of the first phase of the special economic zones in Enyimba City in Abia, Lekki Free Trade Zone in Lagos and the Funtua Cotton in Katsina are priorities and good progress has been made thus far. In addition we are in collaboration with the BOI in investing in infrastructure in small businesses and commercial clusters all over Nigeria,” he added.

He said that the issues of capacity in human capital development, affordable healthcare for all, education, especially getting out-of-school children into the school system, education of girls, and relevant educational curricular were front burner issues.

Osinbajo said that healthcare for all could not come from budget allocations alone as the government had taken major steps in the provision of universal coverage policy.

He said that the next level would be the implementation of compulsory health insurance for all Nigerians on a co-payment basis with government.

“We are working at the level of the National Economic Council to achieve the President’s June 20 charge to state governors to ensure full implementation of free and compulsory education in the first nine years of the school life of every Nigerian child.

“The Home-grown School Feeding Programme which is now in about 30 states and feeding over 9.5 million children daily has helped to drive enrollment figures upwards.’’

The Vice president said that under the energising economies scheme, the Federal Government licensed and ensured the provision of power on a willing-buyer willing-seller basis to large and medium scale markets, such as Sabongari in Kano, Ariaria in Aba and Sura in Lagos.

He said that Federal Government’s Social intervention Programmes had greatly enhanced access to credit and improved the inventories of petty traders.

Osinbajo said that the programme recently won the African Development Bank prize for financial inclusion,stressing that efforts were being made to scale up.

He added that after the presidential policy dialogue preceding the inauguration of ministers, President Muhammadu Buhari developed a list of specific mandates for each ministry.

“The full and effective performance of their mandates is of course an implementation challenge. We look forward to your contributions on the journey,’’ he said.

Earlier in his speech, Prof. Olukunle Iyanda, President of the institute, said the conference always presented a platform to discuss topical issues of national interest with a view to proffering solutions.