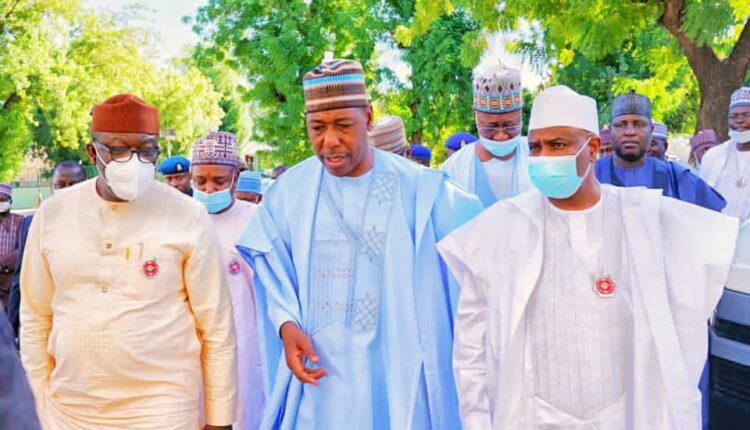 The Nigeria Governors’ Forum has suggested international collaboration as part of measures that can be adopted by the country in its anti-terrorism fight to augment existing strategies aimed at winning the war against insurgency across the nation.

It explained that the suggestion had become imperative in the wake of gruesome killings of 43 farmers in Borno State by Boko Haram terrorists on Saturday and other disturbing insecurity cases across the country, particularly the north east region.

The NGF Chairman and Governor of Ekiti State, Kayode Fayemi, who described the attack as insane, said that the continuous killings across the nation remains an assault on Nigerians fundamental freedoms.

To halt the trend, he said, it was imperative for all tiers of government to recommit and redouble common efforts toward ridding the country of violent extremism.

Speaking when he led the NGF delegation to visit Governor Babagana Zulum of Borno State to condole with the government and people of Borno over an attack by the Boko Haram insurgents, Fayemi argued that the security challenges are beyond the Nigerian military.

Through a statement released on Wednesday, the governor maintained that the military are overwhelmed and needed support to tackle the security situation affecting many parts of the country.

“But what happened in the last three days is by far beyond any imagination, it was a massacre and it was one that none of us could come to terms easily.

“The reality we can all say, and I personally as security scholar, the reality I can see is that our military is overwhelmed. Our military is no longer in a position to single-handedly tackle this menace effectively.

“It is not a criticism of our military, if one were to suggest a coalition beyond that will even include our neighbouring countries, who are probably more experienced in fighting an asymmetrical war. It will not be a loss of our pride as a country.”

The governor also said governors are frustrated with the level of insecurity in the country.

“This is not a visit to gratify ourselves, no, it is an expression of also our own frustration. We can’t bring back the people we have lost in the last couple of days, but if we do not take the necessary steps the entire nation will be consumed by this insurgency,” Fayemi added.