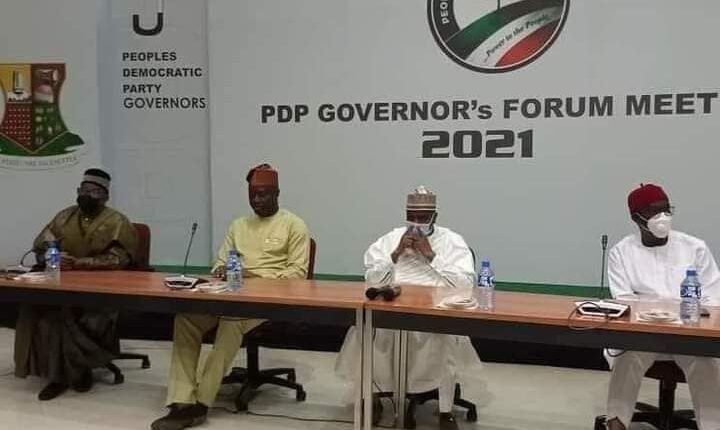 Following the spate of insecurity across Nigeria, State governors elected on the platform of the Peoples Democratic Party (PDP) have recommended an amendment of the 1999 constitution to devolve additional powers to states in other to tackle the disturbing trend of kidnapping, banditry, and other criminalities in the country.

The governors also demanded that the National Assembly expedite actions on passage of the Electoral Act to include provisions for electronic accreditation and electronic transmission of votes ahead of the 2023 general election.

These formed many resolutions reached by the governors after a one-day summit held in Ibadan, the Oyo State capital on Monday to further review the state of the nation.

In a communique read by the Sokoto State Governor and chairman of the forum, Aminu Tambuwal, the governors stressed that there was a need for immediate action and to advance the conversation on security challenges and collapsing economy of the nation.

While asking President Muhammadu Buhari to urgently send an executive bill to the National Assembly for amendment of power devolved to states, they argued that the bill would not be to usurp the Federal Government role but amend the Constitution towards giving the states more powers to control security architecture within their domains.

According to them, this devolution is with respect to security arrangements culminating in some form of state policing and the general security architecture.

The governors also asked the President to convene a meeting of the Nigerian Police Council to develop strategies on how to combat the recent attacks on police formations, especially in the southern part of Nigeria.

According to them, the Police Force remains the appropriate institution to secure Nigeria’s democracy and must not be subjected to personal attacks.

The governors, meanwhile, backed the adoption of ranching as the most viable solution to the crisis between herders and farmers that had claimed several lives and destruction of property worth millions of naira across the country.

They added that reform of civil institutions to achieve efficiency and equity for all sections of the country should also be considered by the president in the amendment.

At the meeting, the governors urged the Federal Government to concentrate on completing existing projects and introduce policies that could enhance and promote national unity and cohesion.