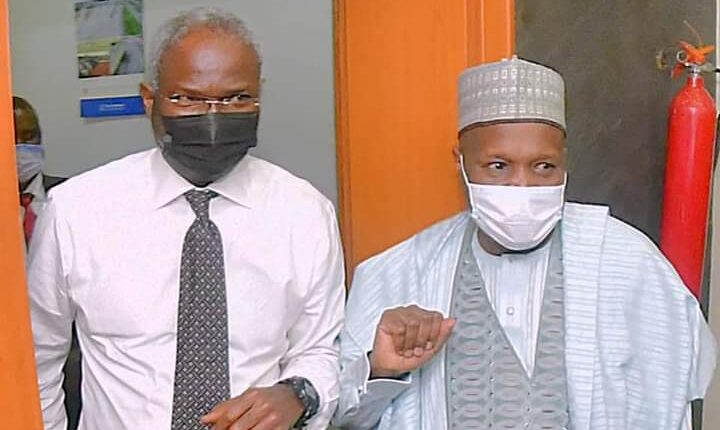 Governor Inuwa Yahaya is not one of the Abuja freak governors, but only visits the nation’s capital when absolutely necessary and on purposeful mission to move the state forward. Judging from derivatives of his similar visits, it’s obvious that the last engagements will bring sweet and good tidings to the state and its citizens.

During His Excellency’s stay at the seat of power, he visited two key ministers; Babatunde Fashola of Works and his counterpart in Ministry of Power, Engr Abubakar Aliyu. He also met with the Chairman and CEO of National Drugs Law Enforcement Agency,  NDLEA, Brigadier General Buba Marwa, Rtd where they discussed issues affecting Gombe State.

The people-friendly leader while at Ministry of Works lamented over the deteriorating condition of some federal roads in Gombe and other five linked states, especially the Bauchi-Gombe, Gombe-Kwami-Dukku-Darazo, Gombe- Biu, Gombe Potiskum and Gombe- Numan- Yola roads.

This call is coming after the Governor has constructed about 340 km road across 11 local government areas of the state under Network 11-100, an initiative to construct 100 kilometers of roads in every LGA.

Hence, the call for quick fix of deteriorating federal roads was not an attempt to pass the buck but genuine feeling of a humane Governor who shares in the road user’s pain and anguish.

Governor Inuwa Yahaya’s words clearly captured his sincerity when he said “I came to see the Honourable Minister specifically with the recent development on the Federal Highways. You know Gombe is at the centre of the North East. All the other 5 states of the North East are linked with Gombe, meaning we have road links that are federally owned between Gombe and the remaining states. Most of those roads are being threatened by flooding this year and they need urgent attention.”

“I also came here to draw Federal Government’s attention so that these roads will get repaired otherwise all of Gombe State will be cut off and that will be too bad”.

At the Ministry of Powers, he urged the Minister, Engr Abubakar Aliyu to push for the full and effective utilisation of the completed Dadinkowa multipurpose dam for Gombe people’s benefit and boost regional economy.

The Governor who observed that electricity supply is key to socio-economic development, adding that putting the plant to effective use will justify the huge Investment by the Federal Government.

Furthermore, the Strategic thinker and astute administrator who understands the negative impact of use of illicit drugs on security and general wellbeing of the citizenry, approached the National Drugs Law Enforcement Agency (NDLEA) to solicit for more synergy.

The Governor observed that there is a strong correlation between the use of illicit drugs and the probability to commit crime and criminality in any given society.

He noted that one of the ingredients fuelling crime and criminality, particularly the ongoing insurgency in the North East can be attributed to the use of illicit drugs which often distort the sanity of the human psychology.

“In the last two years, I saw a lot of development with regards to these issues and being the Governor, naturally all issues tend to end up on my table and we can put a good percentage of all these negative developments in our society to issues that have to do with drugs”.

No gainsaying the fact that Governor Inuwa Yahaya has attracted goodies for Gombe State through his productive engagements with federal Ministries Departments and Agencies (MDAs), the good of Gombe State will continue to reap the significant impact of his visits, just like we are now influx of prospective investors on account of the ease of doing business status of our dear state.