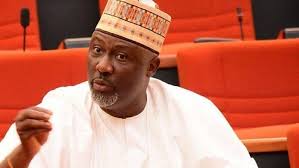 The Senator representing Kogi West Senatorial district and Peoples’ Democratic Party (PDP) member, Dino Melaye, has vilified Nigerian political office holders for not saving petroleum proceeds ahead of a crisis situation, such as that which the nation has faced due to incidence of the coronavirus pandemic.

He stated that it was a failure of leadership for Nigeria, which had sold crude oil for over 64 years to be unable to feed its people during the 14-day lockdown instituted by government.

Melaye, through a post published on his social media page on Tuesday, claimed that the nation’s leaders, including himself, had not used the positions of leadership to the advantage of the people, and called for a reboot in governance.

He claimed that God’s judgment would be meted out to all elective and appointed political office holders in the country, saying that it was pertinent for Nigerian governance to be revamped in order to avert future challenges.

EVERYONE WHO HELD AND IS HOLDING ANY POLITICAL OFFICE IN NIGERIA WHETHER ELECTIVE OR APPOINTED INCLUDING ME HAVE FAIL.WE SOLD CRUDE OIL FOR 64 YEARS BUT WE COULDN'T FEED OUR CITIZENS FOR JUST 2 WEEKS OF LOCKDOWN!! WELL, THE GOD OF THE POOR WILL JUDGE US ALL. ITS TIME TO REBOOT..