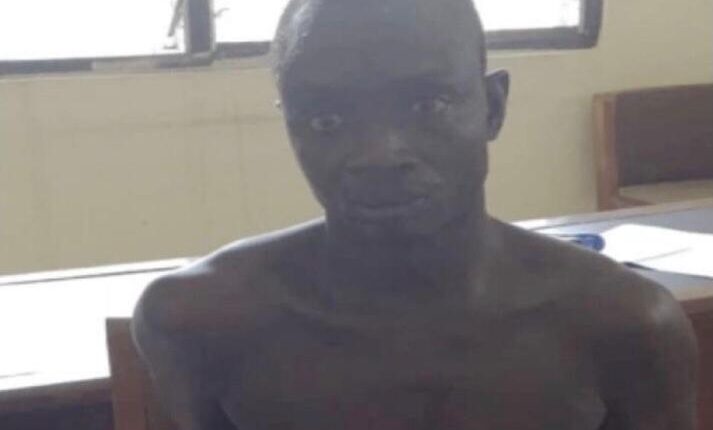 The Ghanian Police has disclosed that it has arrested and detained a 42-year-old man identified as Papa Gyabi for allegedly killing his girlfriend over sex denial.

It explained that the suspect, a resident of Shama-Kumasi in the Western region of Ghana in the early hours of Saturday, April 24 killed his girlfriend after he claims she denied him sex.

The deceased, identified as Rita was said to have been killed with a hammer by the 42-year-old man and was found lying motionless in a pool of blood with her head smashed.

It was gathered that the incident which occurred shortly after midnight started with a quarrel which later degenerated into a struggle between the suspect also known as Landlord and the girlfriend.

The security agency revealed that the deceased, who was a native of Daboase-Krobo in the Wassa East District visited Gyabi at his residence at Shama-Kumasi.

“They said later in the evening the two retired to Landlord’s room but at about 12:10 am, a heated argument started between the two resulting in a struggle that appeared to have ended at about 1:00 am.

“At about 5:00 am one of the residents who did not understand what all the commotion was about and the sudden quietness, curiously peeped through Papa Gyabi’s window and found the girlfriend lying motionless in a pool of blood. The eyewitness reported the incident to the Shama District Police.”

The police spokesperson in a report released on Sunday said the police officers went around the building and saw the suspect through the window wielding a hammer and threatening to harm anyone who dared open the door.

Adiku said the police persuaded Gyabi to open the door and let the police in for a discussion but he refused. “The police were left with no option than to force the door open, overpower Gyabi and disarm and effect his arrest,” she added.

She said upon opening the suspect door, the body of the deceased was found lying in a pool of blood with the head smashed. she added that there were also multiple deep wounds on the right wrist of the victim.

Adiku said the Regional Crime Scene Management Team has since taken over the crime scene and had the scene processed after which the body was removed and deposited at the Effia Nkwanta Regional Referral.