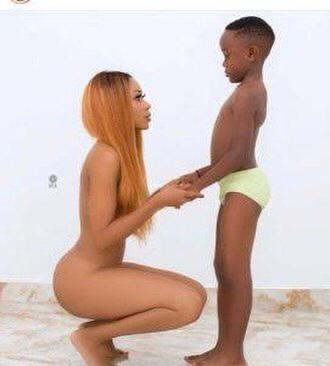 An Accra circuit court has sentenced a Ghanaian actress, Rosemond Brown, popularly known as Akuapem Poloo,  to three months imprisonment for the publication of herself and her son’s nude pictures.

The court presided over by Her Honour Christina Cann handed 90 days sentence to Poloo after she pleaded guilty to three charges leveled against her.

As gathered, the court presided over by Her Honour Christina Cann deferred her sentencing on Friday, for the defendant to undergo a pregnancy test to ensure she was not pregnant before her sentencing is passed.

As gathered in June 2020, the Ghanaian movie star uploaded a controversial nude photo of herself and her son on the occasion of his seventh birthday.

However, she apologized after negative reactions trailed the now-deleted post. She explained that the picture was to appreciate motherhood.

“What I was saying was that, no matter how naked you see your parent, don’t run away from them. Get close to them and clothe them.”

Meanwhile, her counsel has indicated that the judgment will be contested at the appeal court.