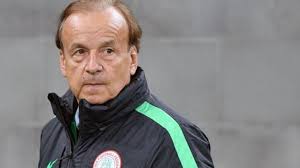 The Nigeria Football Federation (NFF) has disclosed that it is set to sign a new two-year contract extension with German Super Eagles’ Coach, Gernot Rohr.

It said that the new contract, which is to be signed within the week, is dependent on the coach’s agreement of the stipulated terms for the extension of Rohr’s four-year stay with the nation’s national team.

The NFF made the announcement in a statement released on Tuesday, saying that the German national would be expected, during the two-year period, to lead the Super Eagles team to qualify for a seventh World Cup Finals, as well as the 2012 Africa Cup of Nations tournament.

The federation revealed that the contract would mandate the coach to spend more time within Nigeria and that new provisions had been made for effecting Rohr’s payments in the local currency, as opposed to his current monthly salary of 45,000 Euro ($49,000).

“The executive committee has mandated the general secretary to liaise with Super Eagles technical adviser, Gernot Rohr, with a view to concluding all matters around his new contract within the next one week”.

The 66-year-old technical adviser has been in charge of the Nigerian National Team since 2016.