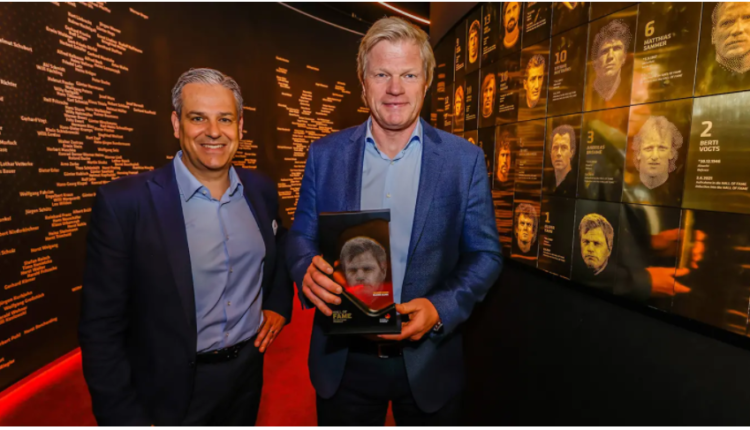 The German former world-class goalkeeper, Oliver Kahn, has finally received his HALL OF FAME award from the country’s football association and has taken his place in Germany’s football history.

Kahn, who now works as a director at FC Bayern Munich, received the award as recognition of his contribution to football development in the country over two decades.

The Titan, as he was fondly called by his admirers, was already one of ten new members of the team in the German Football Museum in 2019, but the official presentation could only be held now due to the effects of the coronavirus pandemic.

At the short presentation ceremony on Thursday that was carried out by Museum director Manuel Neukirchner, the former goalkeeper described the recognition as an honour that would remain with him for many years to come.

He said: “When I started playing football as a little boy on the pitch next to the Karlsruhe Wildlife Park it was always my biggest wish to be able to play in the neighbouring big stadium one day. I never thought I’d end up being commemorated in a special way at the German Football Museum”.

In his playing career at the record champions, the Titan won the German league title eight times, the DFB Cup six times, and the UEFA Cup, Champions League and the Intercontinental Cup once each. In addition, Kahn received numerous individual awards such as the IFFHS World’s Best Goalkeeper (1999, 2001 & 2002), German Footballer of the Year (2000 & 2001), and was named the best player at the 2002 World Cup.

The HALL OF FAME Of German football was set up in 2018. The initial team included the former Bayern players Sepp Maier, Franz Beckenbauer, Paul Breitner, Andreas Brehme, and Lothar Matthäus, and it has now been expanded with the addition of former FCB players Michael Ballack and Jürgen Klinsmann in addition to Kahn.

The presentation ceremony at the German Football Museum will be shown again on 2 June on RTL following the international between Germany and Denmark. FCB honorary president Uli Hoeneß also talked about personal memories and anecdotes relating to the award winners.