Just in: Family, others lay Baba Suwe remains to rest amid… 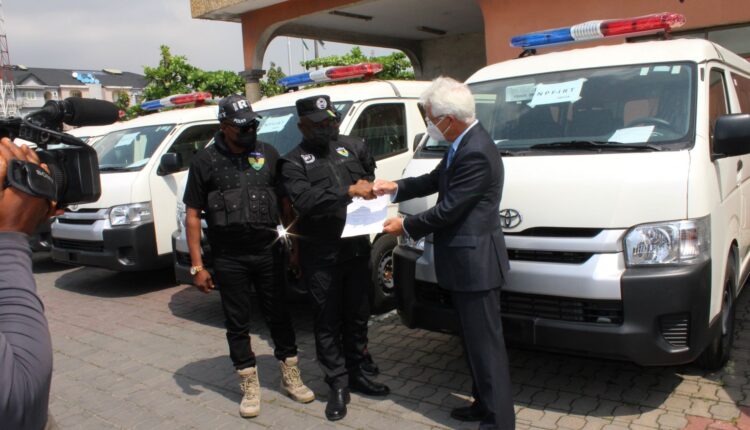 The German Government has donated 10 operational vehicles to Nigerian Police, the Economic and Financial Crimes Commission (EFCC), and three other agencies, to aid them in combating crime and make the country more secured for Nigerians.

Other agencies that also benefited from the German government gesture were Directorate State Services (DSS), National Drug Law Enforcement Agency (NDLEA) and the National Agency for the Prohibition of Trafficking in Persons (NAPTIP).

The vehicles were donated by the government through the German Federal Criminal Police Agency (BKA), to make the security agencies become more effective in their pursuit for a crime free Nigeria.

During the handling over ceremony held in Lekki axis of Lagos on Tuesday, the Consul General of the Federal Republic of Germany in Lagos, Dr. Bernd von Muenchow-Pohl, said that each of the agency was given two vehicles to boost their operations.

Muenchow-Pohl disclosed that the agencies were picked following their long standing relationship and collaboration with BKA on maintenance of law and the order in Nigeria.

According to the ambassador, the collaboration between the agencies and BKA is not limited to operative measures but also covers areas of trainings, technical support and supply of equipment to the five law enforcement agencies.

The ambassador explained that BKA was established by the German government to end international insurgency, curb international organized drug trafficking, human trafficking for the purpose of sexual exploitation.

Muenchow-Pohl added that the German law enforcement agency was also saddled with the responsibility of combating cybercrime and international serious crimes including kidnapping, and sea piracy.

Meanwhile, in their unanimous commendation on the German Embassy’s gesture, the security agencies assured the Ambassador that the vehicles would be put to use in their various agencies for combatting crimes and protection of the citizens.

On his part, the Inspector General of Police (IGP) Alkali Baba, who was represented by the Head of Police’s Intelligence Response Team, IRT, DCP Tunji Disu, said that the donated vehicles by the German Embassy were coming at a time when police were doubling up its strategy in combating crimes across the country and that the gesture would go a long way.

Baba promised that the Nigerian police would continuously serve in best interest of the country and live up to expectations by protecting lives of Nigerians and their property.

“On behalf of the entire Nigeria police, we want to thank you for this hand of fellowship that you have extended to us, the donation of these vehicles.

“We are given you our words that the vehicles would be used for the protection of lives and property across the country”, he added