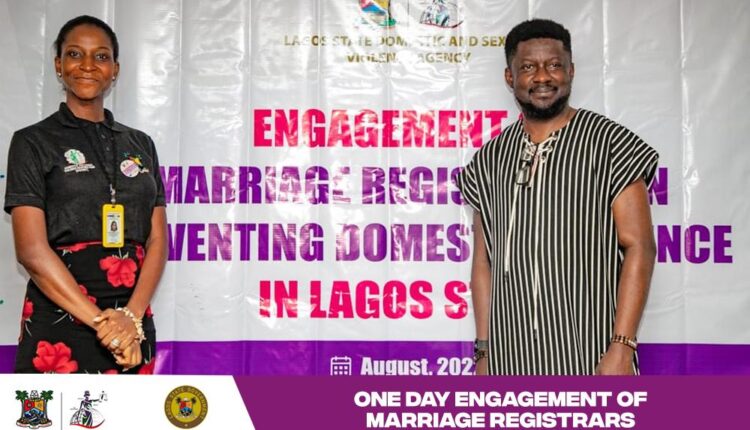 In an effort to prevent domestic and sexual violence in Lagos, the State Government has concluded plans to start compelling intending couples to undergo compulsory marital counseling exercises before being pronounced as husband and wife.

It said that the exercise would help to effectively prepare both parties for their union and prevent issues that could arise after both parties start living together.

The plan was announced by the government during a one-day engagement program for the state’s marriage registrars, organized by the Lagos State Domestic and Sexual Violence Agency (DSVA) in conjunction with the Ministry of Local Government and Chieftaincy Affairs.

The Permanent Secretary for the Ministry, Kikelomo Sanyaolu, said that the move was a measure to prevent domestic and sexual violence in homes across the state.

At the event yesterday, Sanyaolu assured that the staff at the ministry were willing and ready to ensure that the scourge, Domestic violence, was proactively addressed in Lagos state.

The Executive Secretary, DSVA, Titilola Vivour-Adeniyi, expressed concerns that at least 60 percent of survivors of domestic violence who had contracted their marriage under the Matrimonial Causes Act, saw the abusive signs of their intending spouse but ignored it.

Vivour-Adeniyi noted that their decision to still proceeded with the union has made it necessary for the marriage registrars to provide professional support to intending couples.

One of the facilitators for the training, Tinuke Odukoya; the Executive Director, Centre for Women’s Health and Information, Mr. Oladele Emmanuel Temilade, Founder, Institute of Marriage Administrators & Counselors of Nigeria and the Founder of Family Life Engineer, Praise Fowowe, took the 120 marriage registrars at the training on different issues that often arise after marriage.

Some of the issues raised by the experts include gender and sex roles, understanding Domestic violence, statutory roles of Marriage registries, family system engineering as well as an introduction to the curriculum of the Lagos State Marital effectiveness preparatory Counselling.