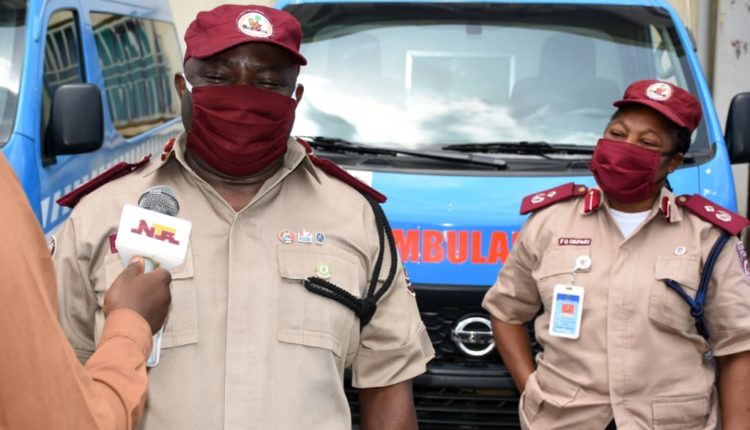 As parts of its efforts to support state governments, the Federal Road Safety Corps has deployed additional two life support ambulances with complete team of personnel to support the Nasarawa State Government’s health response against the coronavirus pandemic outbreak in the state.

It explained that the devastating effect of the virus and challenges it poses to the state economy and its accompanied hardship on the people had necessitated the gesture by the Federal agency to support the government efforts against the pestilence.

The FRSC Corps Marshal, Dr Boboye Oyeyemi, said the deployment of both ambulances and medical team of the agency to the state was in line with the FRSC commitment in supporting the country’s health response against the deadly respiratory disease.

Boboye, through a statement released to newsmen by the FRSC Public Education Officer, Bisi Kazeem, maintained that the federal agency would not relent in supporting both the Presidential Task Force (PTF) on COVID-19 and state governments in the area of personnel deployment and provision of life support ambulance services to ensure the country gain early control against the viral infection.

According to him, the Corps will continue to work round the clock to ensure that it effectively delivers on its mandates in the ongoing fight against coronavirus, adding that personell of the agency deployed to the frontline against the pandemic will carry out their duties without any form of laxity.

While appreciating the gesture, the Nasarawa State Government, through a letter by signed by the state’s Commissioner for Health, Ahmed Yahaya, said the government response was bolstered after it took over the life support ambulances on Friday, 15 May, 2020 in Lafia, adding that the state will put into good use the ambulances and medical team of the agency.

The Commissioner, who described the FRSC gesture as, uncommon, said the deployment was a positive boost to the state’s capacity and measures put in place to combat the devastating novel coronavirus pandemic.

Yahaya, according to Kazeem, lauded the Corps’ continuous show of commitment and support towards the fight against the global health challenge, adding that gesture as demonstrated by the Corps would remain indelible in the history of the State.

He noted that the deployment of the ambulances and personnel of the agency would aid prompt evacuation of identified coronavirus patients to the state’s isolation centres.