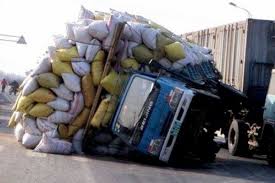 FRSC disclosed this while decrying commercial vehicle, who have reportedly taken advantage of Lags State Government ban on motorcycles and tricycles, to overload their vehicles with passengers, animals or goods to make more money.

It would be recalled that Lagos State announced that enforcement of extant Transport Sector Reform Law 2018 would commence from saturday, which was ban of motorcycles and tricycles from 15 local government areas, as well as major highways and bridges in the state.

Speaking to newsmen in Lagos, on Monday, Zonal Commanding Officer, Samuel Obayemi, had stated that the corps would not look away from traffic offenders and explained that overloading could cause road accidents as well as make rescue operations difficult once an accident had occurred.

Obayemi noted that the ban was not reason enough to endanger lives and property by overloading and that Lagos state government was already working on ways to alleviate increased traffic and demand that had been caused by the ban and as such, all commercial vehicle drivers were expected to act in accordance with traffic laws.

He said, “Now that the state government has banned and restricted the use of Okada and tricycles in major highways in Lagos, a lot of motorists will now want to overload their vehicles, flouting the law against overloading,”

“We are saying that FRSC will not fold its hands and allow motorists to take laws into their hands, we will not tolerate overloading simply because of the ban of motorcycles and tricycles on Lagos highways”.

“It is still an offense for you to overload your vehicle either with animals or people and beginning from today, we will emphasise that people do not overload their vehicles because it poses great dangers to all involved as well as fellow road users,”

“The danger there is that if there is a crash, it will be more difficult to rescue victims when the vehicle is overloaded than when it is not”.

He had reiterated that overloading was an offense and that offenders would face full force of the law, and also implored members of the public not to encourage such greedy drivers by allowing themselves be loaded into their vehicles unlawfully.

“Under no circumstance or pressure should you alloww yourselves bee loaded illegally into an already full vehicle. I want the public to realize that this  is for their own good, to ensure their safety and that of their properties.,”

“So, we are advising people not to allow themselves to even be the overloaded passengers in any vehicle, commercial or otherwise”.