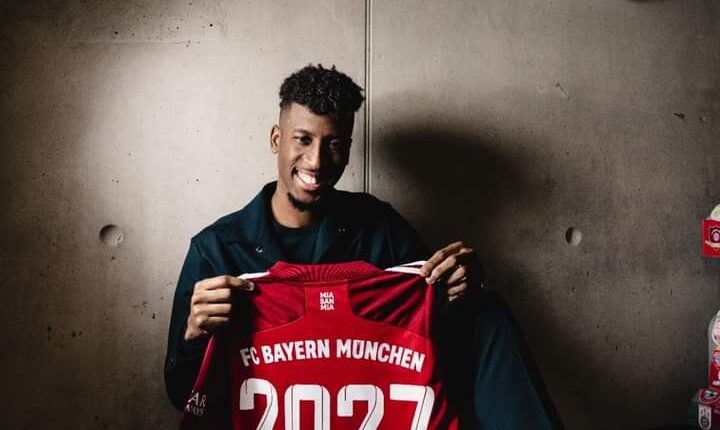 A France winger, Kingsley Coman, has extended his contract with the German club, Bayern Munich, by another four years, which ties him to the Bundesliga team until 2027.

The 25-year-old’s contract with the club was originally due to end in June 2023 after joining Bayern permanently from Juventus in 2017 following a two-year loan spell.

He extended his contract on Wednesday, signing contract documents that were witnessed by the club Chief Executive Officer (CEO) Oliver Kahn and Hasan Salihamidzic.

Addressing pressmen after completing the signing ceremony, Coman said: “I’m very happy because FC Bayern are one of the best clubs in the world and I know we still have a lot of opportunities and big goals here. I’ve been at the club since 2015 — it feels like a big family.

“Everything is perfect here. My best years as a footballer are still ahead of me, and I’m glad I’ll be spending them at FC Bayern. My biggest goal is to win the Champions League again — and this time, please, together with our fans.”

Speaking on the contract extension, Kahn said that players with Coman’s ability were often wanted by clubs all around the world.

“This contract extension is another example of how attractive our club is at the highest level internationally. Kingsley is fully committed to FC Bayern, he’s found his footballing home here. World-class players consider very carefully where they sign their contracts these days. We’re pleased that Kingsley has extended with us long-term: when he’s on the ball, the fans get excited. People come to the stadium to see such players.”

Salihamidzic: “We’re very happy Kingsley Coman has committed to FC Bayern with a long-term contract. Kingsley came to FC Bayern in 2015 as one of Europe’s greatest attacking talents.

“He has developed into a world-class player with us over the past six and a half years. He already made history with his goal in the 2020 Champions League final and now has a great chance to leave his mark on an era.

“King, with his quality as a provider and his goalscoring threat, is of utmost importance for the future of our team. Our aim is for FC Bayern to continue to compete at the top of Europe in the coming years. With the contract extensions of Kingsley, Joshua Kimmich, and Leon Goretzka, we have laid a strong foundation for this.”

He has also won the Champions League, the FIFA Club World Cup, and the UEFA Super Cup. With his decisive goal in the 2020 Champions League final against Paris Saint-Germain, he played a major role in the club’s historic six-title year.

Coman has since made 104 appearances for the club and scored 21 goals, including the winner in the 2020 Champions League final against Paris St-Germain.