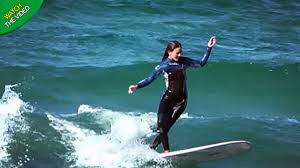 French surfer, Poeti Norac, has died in Australia at the age of 24, the French Surfing Federation has confirmed.

Norac, a longboard surfer who finished runner-up in the French national championships in 2018 and third in 2016, had moved to Australia for several months and died last weekend on Queensland’s Sunshine Coast.
The federation did not confirm a cause of death but said their statement is being made with her family’s agreement.
She recorded 10 victories in the Coupe de France including the 100% Girls competition in 2017.
“The surfing community has lost a member of its family, a beautiful person with a shining smile, an artist on the longboard whose enthusiasm radiated from (her region) Vendée and everywhere else,” read a statement on the French Surfing Federation’s website.
Norac started surfing with her father at the age of six in her hometown Les Sables-d’Olonne on the east coast of France. She had been competing for 10 years having transitioned from short to longboard format.
In the list of tributes in honour of the deceased, lifestlye brand Oxbow, one of the brands sponsoring her, said: “It is with great sadness that we learned of the death of our young ambassador Poeti Norac”.
“The youngest of our family of ambassadors for over four years, Poeti had moved to Australia several months ago to perfect her English and ride the lovely Australian waves.
“Her father informed us of her death on the Sunshine Coast last week, and it is in agreement with the family that we publish this terrible news today.”
UWL surfboards wrote that Norac “forever etched in us her smile and sparkling eyes every time she came to see us over the last eight years. All our thoughts go to her family and friends.”
Koalition Surf, meanwhile, posted a black image with the words “too young to leave, have a safe ride.”
A ceremony honoring Norac’s life will be arranged soon.