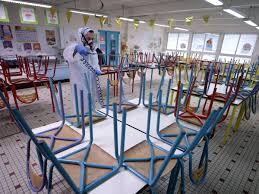 The French Government has reopened schools across the country for resumption of academic activities earlier disrupted by outbreak of coronavirus with mandatory use of face masks and other COVID-19 preventive measures.

It explained that the reopeoning had become imperative following gains being recorded against the virus and effective emergency response of the government outline to mitigate transmision of the virus among citizens, particularly the students.

The country’s Education Minister Jean-Michel Blanquer said that measures have been put in place by stakeholders to ensure safe resumption of students, among which face-masks and other preventive measures have been mandated for teachers and for all children aged 11 or over.

Through a statemenet released on Tuesday, the minister said that schools had been reopened for all children to resume from their summer break, stressing that absentee students must present a valid reason for their absence in school.

Blanquer said that though the country was one of the hardest-hit in Europe by the coronavirus epidemic, with more than 30,000 deaths, the government had put in place necessary measures and guidelines to aid safe resumption and that parents need to trust the government on its initiatives.

According to him, plans had been concluded to adopt distance learning if local lockdowns have to be reimposed in the worst-hit areas following recent fears of surge in confirmed cases of the deadly respiratory disease.

On his part, French President, Emmanuel Macron, said that it was pleasing that school was reopened to allow for continuation of academic activities, adding that education creates the best opportunity for social engagement.

“Education is an opportunity, it brings us together. This new term has many challenges, but at last we are all back together again!,” he wrote in a post on his social media page.

France already opened almost all schools gradually in the last weeks of term before the summer, with authorities anxious for children to make up ground lost during a virus lockdown from mid-March to mid-May.

Infections have been rising rapidly again in recent weeks, at more than 5,000 daily for most of the last week compared with under 1,000 daily for the first three weeks of July.