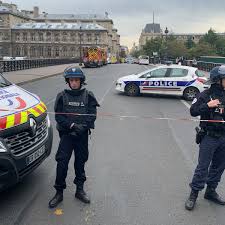 The French police has arrested another person suspected to be involved in a knife attack that claimed lives of a woman and two other people inside a church in Nice during the week, the latest arrest was the third suspect, linked to the attack, the police has inside its custody.

It was learnt that the third arrested suspect was taken into police’s custody within 24 hours the knife attack occurred and French police were after any in connection a man who beheaded a woman, Samuel Paty, a teacher, and killed two other people inside a church in Nice.

The killing was reported as the second deadly knife attack to had occurred in the country in two weeks, leaving the French government no choice than to ramp up security efforts against possible militant attacks.

Police disclosed that the arrest of the third suspect followed other ones after the incident on Thursday and that other people in custody, including one Nice resident, were being investigated over suspected contacts with the attacker.

French media had reported how a school teacher in a Paris suburb, was beheaded by an 18-year-old Chechen who was apparently incensed by the teacher showing a cartoon of Prophet Mohammad in class.

It claimed that the suspected assailant was shot by police and that the attacker was in critical condition in a hospital where he was receiving treatment.

According to reports,  Nice the church attack occurred amid growing Muslim anger across world over France’s defence of right to publish cartoons depicting the prophet and that action of the government and protesters have denounced France in street rallies in several Muslim-majority countries, and some have called for boycotts of French goods.

After the incident, the French President, Emmanuel Macron, directed that soldiers should be deployed to protect sites such as places of worship and schools, as French citizen continue raising alarm that other Islamist militant attacks could take place.

During an interview,  Macron indicated that his government would do its best to calm tension against misinterpretation of his recent statements on Islam and that he was working on peace dialogue between religions.

“I would continue to fight against extremism so that all French people can express their faith in peace and without fear,” He said.

Meanwhile, the Franch Chief Anti-Terrorism Prosecutor disclosed that the man suspected of carrying out the Nice attack was a Tunisian national and had arrived Europe in September through Lampedusa, the Italian island off Tunisia.

Sources from Italy indicated that prosecutors in Sicilian city of Palermo, in Italy, were into investigating the man’s subsequent passage through the island, including the people he might have been in touch, and also requisitioning phone records.

They said that investigators were already looking into possibility that the suspect arrived in the Italian city of Bari in early October, on a ship used to quarantine migrants, before leaving for Palermo.