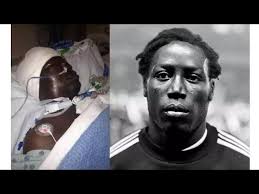 A France former footballer, Jean-Pierre Adams, who had been in a coma for over 39 years, has been confirmed to have died at the age of 73.

Adams, a Paris Saint German (PSG) defender, was admitted to hospital for knee surgery in March 1982 but never regained consciousness after an error with his supply of anaesthetic.

The deceased, who was born in the West African country, Senegal, made more than 140 appearances for Nice and PSG, and played for the France national team for 22 times.

The connections made to sustain the footballer was removed on Monday after he was certified to have passed on by medical experts in France.

Reacting to the demise of the defender, PSG, through a statement made available to newsmen, described Adams as a charismatic and experience player that commanded respect among sportsmen.

Also, Nice said the club would pay tribute to Adams, who won 22 caps for France between 1972-1976, before their next home game against Monaco on 19 September, 2021, to celebrate his contributions to sports development in the country.

The deceased had sustained a injury and required surgery and on the day of Adams’ operation to repair a damaged tendon in his knee, which was suffered while on a coaching training camp, many staff at the hospital in Lyon were on strike.

His operation still went ahead, inspire of the dearth of staff, with the anaesthetist looking after eight patients, including Adams, at the same time. And the former defender was supervised by a trainee, who later admitted his inexperience, saying “I was not up to the task I was entrusted with.”

Between the anaesthetist and trainee, numerous errors were made during the operation and it caused Adams to suffer a cardiac arrest and brain damage that had kept him in active for about four decades.

It wasn’t until the mid-1990s that the anaesthetist and trainee, after several battle in courts, were punished with a one-month suspended sentence and a 750 euro fine.

Adams was discharged from hospital after 15 months and had been cared for by his wife, Bernadette, ever since.