Four people dies,14 others escape death during earthquake in China 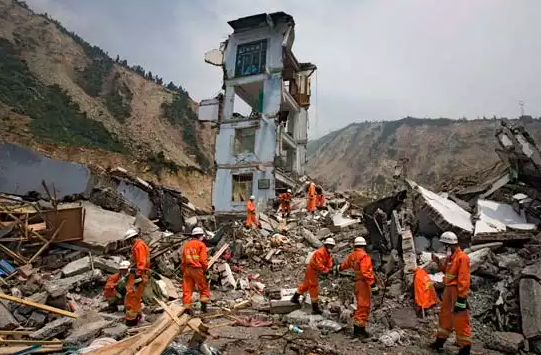 At least four people have been reported to have died and 14 others escape death during earthquake, which have thrown the residents of the community into distress, in the southwestern city of  China .

As gathered, the earthquake which stroke the city and killed four people and injured 14 others, was also said to have damaged also houses of residents living in the community, which has rendered them homeless.

According to the earthquake relief headquarters in Ya’an city, those killed were hit by falling rocks while those who were injured have been taken to hospitals for treatment.

Confirming the incident, the China Earthquake Network Center, disclosed that a magnitude 6.1 quake struck at a depth of 17 kilometers (10 miles) in Ya’an, about 110 kilometers (65 miles) southwest of Chengdu on Wednesday.

The Sichuan fire department also noted that some houses were damaged in which more than 1,400 rescuers were headed to the area, and according to the Southwest Railway Authority, some sections of track were closed, which caused the delays to passenger trains.

Meanwhile,  the provincial officials said that according to CGTN, the international arm of CCTV, the first earthquake in the city was an aftershock of a magnitude 7.0 quake in 2013 which killed 196 people.