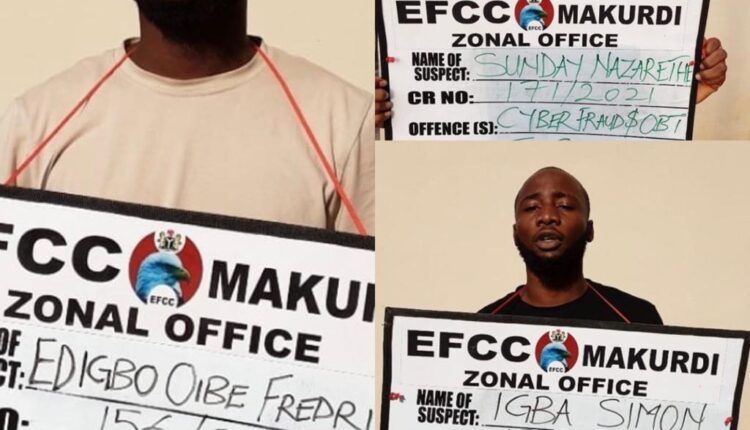 No fewer than four online dealers have been arrested and detained by the Economic and Financial Crime Commission (EFCC) for their alleged involvement in various computer-related frauds.

As gathered, the suspects, said to be all-male, were reported to have been arrested by personnel attached to the anti-graft agency’s Makurdi Zonal Office on May 18, 2021.

The suspects arrested include Igba Simon, Edigbo Fredrick, Sunday Nazareth, and one other, were rounded up by operatives of the Commission sequel to credible intelligence on their alleged criminal activities.

The EFCC’s Head of Media and Publicity, Wilson Uwajaren, who confirmed this in a statement made available to newsmen on Monday,  said that the suspects were arrested at a popular Hotel in Makurdi, Benue State.

Uwajuren stated that at the point of arrest, Simon Igba was in possession of a Toyota Corolla car recently acquired and an iPhone X. More iPhones, Macbook Air and Modems, were among items recovered from the remaining suspects.