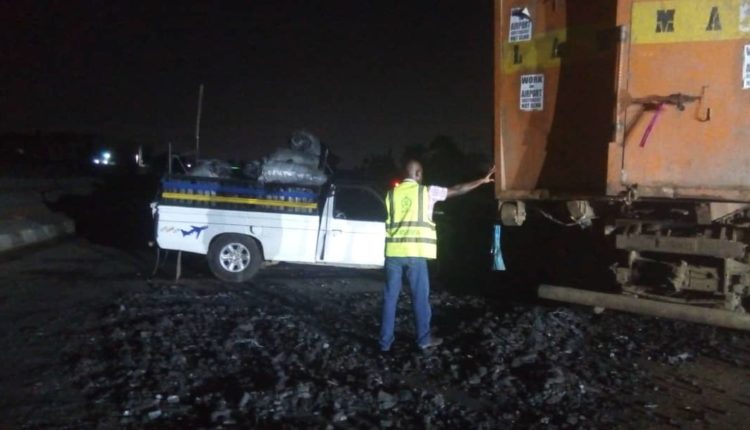 Of the four persons that escaped death during the accident that occurred early hours on Saturday at the Ile Zik end of Lagos-Abeokuta Expressway was the driver of the pickup van and staff of LAWMA who were currently admitted at Lagos State University Teaching Hospital (LASUTH) for treatment.

An eyewitness told our correspondent that the accident occurred when the LAWMA compactor truck, with an unknown number plate, drove against traffic inward Oshodi, had a head-on collision with a pickup van, also with unknown number plate, at the location, leaving four persons with varying degrees of injuries.

While confirming the accident, LASEMA Public Affairs Officer, Nosa Okunbor, in a statement made available to our correspondent, disclosed that the trucks have been removed from the road to give vehicles on essential duty access to the road during lockdown.

“Further investigation revealed that the LAWMA truck was driving against traffic from Ile-Zik, while the Pickup van, enroute Iyana-Ipaja axis from Oshodi, collided at the scene.

“Four people, including the driver of the pickup van sustained different degrees of injuries and were taken to LASUTH for treatment.

“Lagos Rapid Response Squad of the Nigerian Police and LRT were responders at the scene. The operation was conducted with the deployment of the agency’s heavy-duty equipment (Super Metro) for recovery of the truck and van.

“The accident LAWMA Compactor truck and pickup van were recovered off the road, placed on a layby and further handed over to the Police Officers at MAN Police Station, Wemabod estate, Adeniyi Jones Ikeja”.