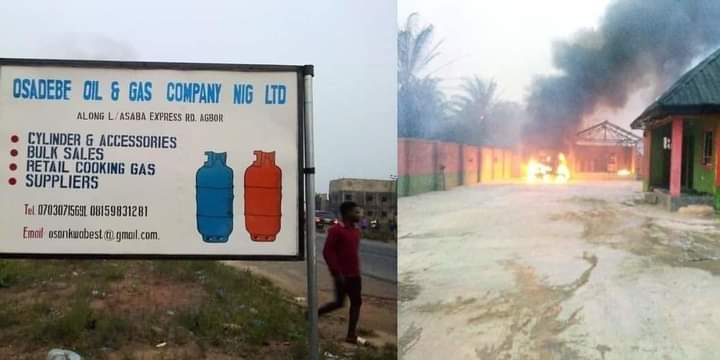 Atleast three children and an adult were reported to have died and 11 others suffering different degrees of burns after a gas plant, OSADEBF Oil and Gas company, went up in flames in Agbor, Ika South Local Government, Delta State.

Aside from the victims which include a female adult, several buildings were said to have been razed by the fire that emanated after the explosion that caused pandemonium in the Delta community.

The casualties figure was confirmed during a visit to the scene by the state governor, Ifeanyi Okowa, who came for an inspection to ascertain the extent of damages and to commiserate with the deceased families.

During the visit on Saturday, Okowa described the explosion as unfortunate and disclosed that efforts would be made to prevent future occurrence across the state.

The governor noted that the explosion did not take place within a densely populated area, saying the casualties figure and damages inflicted would have been more.

“But the unfortunate thing is that we’ve lost people. We’ve lost four persons. One of the victims is a grown-up woman and while the other three are children. It’s a very painful thing.

“After my visit to the two families that lost their dear ones, I also visited the Central Hospital at Agbor where they were initially rushed to with a varying degree of burns ranging from 80 to 90 per cent.

“They were immediately offered medical services even though they wouldn’t have been able to attend to them because of the extent of the burns so they have to transfer them to the Federal Medical Centre Asaba and the University of Benin Teaching Hospital with aid of ambulances provided by the State Government.

“To ensure that such incidents do not reoccur, especially in other gas plants that are located in residential areas, we will be working with the State House of Assembly to pass legislation that will prohibit gas plants from being domiciled in densely populated areas.

“I’m aware that we have some of these facilities even in more densely populated areas and I’m going to sit with the House of Assembly – we have to do an immediate legislation that will not allow such (incident) anymore,” he added.