Four Chinese tourists die, 26 others injure in US road crash 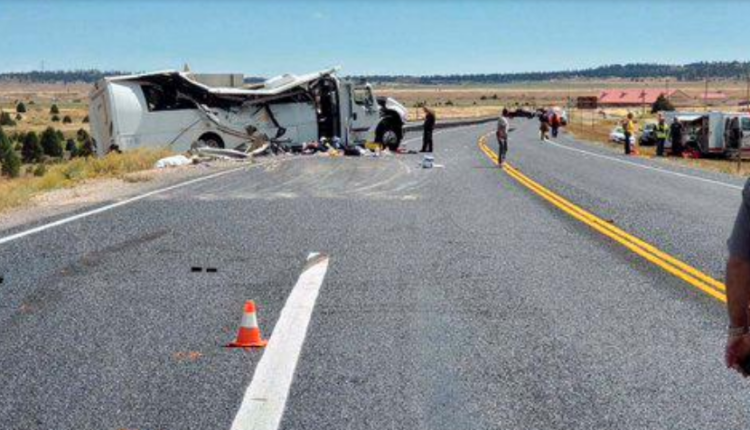 Tragedy has struck in Utah, United State when a bus conveying Chinese tourists careened off a road, killing four passengers and injuring the remaining 26 others on aboard,

It was gathered that the crashed which occurred near Bryce Canyon National Park had 29 passengers who were citizens of mainland China while the driver was a Chinese-American; though he survived the crash, but his condition was not immediately known.

The Guild gathered that the cause of the crash, which occurred at about 11:30 a.m. on State Route 12 just west of the park, was under investigation, but weather did not appear to be a factor, state Highway Patrol and Garfield County Sheriff’s Department officials said.

Thirty people, including the driver, were aboard the bus when it swerved across the road and back before rolling over against a guard rail and coming to rest upright, authorities said. Photos from the scene showed the vehicle’s roof crushed in on top of the passenger compartment.

The 26 survivors were taken to various hospitals with injuries ranging from minor to life-threatening, according to a Utah Highway Patrol spokesman, Corporal Chris Bishop. At least five people were critically injured, Bishop said, noting that figure was a downward revision from the Highway Patrol’s initial report that 12 to 15 people were critically injured.

Sheriff’s spokeswoman Denise Dastrup said five of the injured were evacuated to hospitals by helicopter.

The Chinese Embassy in Washington said on Twitter that it was sending diplomatic personnel to the area to further assist the victims. “We are saddened to hear about the accident in Utah involving a bus carrying Chinese tourists. We are thankful to authorities in Utah for their assistance,” the embassy said.

A 14-mile (23 km) stretch of highway around the crash site was shut down in both directions to make way for emergency personnel and accident investigators, Bishop said.

Bryce Canyon National Park, best known for its spired, multi-hued rock formations called hoodoos, remained open to visitors, though traffic to the park was restricted. While all inbound routes to Bryce Canyon from the north, south and west pass were blocked by the crash site on SR-12, alternate routes from the west were open, park spokesman Peter Densmore said.