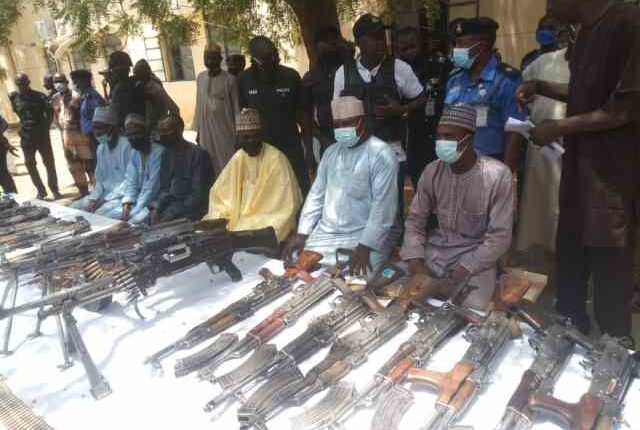 No fewer than four bandit leaders have denounced terrorism and other illegal activities in Katsina State and commenced their rehabilitation regime as part of measures to aid their full debriefing before they are reunited with the society.

The surrendered bandits, identified as Sale Turwa, Mani Turwa, Ado Sarki, and Sani Mai-Daji and were reportedly residing in the thick forest of Illela in Safana Local Government Area of Katsina State.

Confirming the development, the State Commissioner of Police, CP Sanusi Buba, said that the decision by the four leaders followed the command’s renewed efforts aimed at ending criminality in the state.

Briefing journalists at the command headquarters, Katsina on Thursday, Buba said that the command’s onslaught against banditry, armed robbery, kidnapping, among others were informed by the Federal Government’s directive to all security agencies to clamp down on all marauding bandits in the forest.

While disclosing that the bandits came forward unconditionally, the police boss warned others still engaging in terrorism to renounce it and turn a new leaf.

“It became absolutely imperative at this juncture, to warn other recalcitrant bandits, who refuse to surrender, that nobody has a monopoly of violence and that government is mightier than any person or group of persons,” Buba said.

“The Nigeria Police Force and indeed other sister security agencies will leave no stone unturned in isolating and dealing decisively with any individual or group of unrepentant bandits that refused to surrender and keep hibernating in the forest. The Command wishes to assure the good people of the state that banditry and other crimes will soon be history as the Security Forces are on top of the situation.

“Members of the public are hereby enjoined to partner with the security agencies by providing useful information that will lead to the arrest of bandits and their collaborators, please.”

While explaining what led to their decision of renouncing terrorism, one of the repented leaders, Ado Sarki said: “We sat and discovered that what we were doing was not good after buying large catch of arms to protect our cattle and defend ourselves.

“We hereby surrendered and distance ourselves from various bandits groups in the forest. We have nothing to do with these arms. I promised and pledged to assist security agencies in an effort to fight anyone who’s not ready to repent.”