Formula One pioneer passes on @ 90 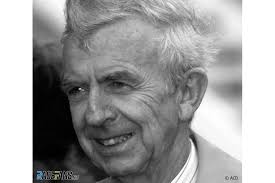 The pioneer of Motorsports, Tony Brooks, who won six Formula One grands prix in the 1950s and was popularly called the “Racing Dentist”, has died at the age of 90.

Brooks, who was said to be the last surviving Formula One race winner of the 1950s, was said to have died after a brief illness.

He was said to have won on his F1 debut at the non-championship 1955 Syracuse Grand Prix, where he was a last-minute entry and took time off from studying to become a dentist.

Confirming his death on Wednesday, Chief Executive Officer, Formula One, Stefano Domenicali, said that the pioneer would be deeply missed as his contributions had been immense.

“He was part of a special group of drivers who were pioneers and pushed the boundaries at a time of great risk, He will be missed and our thoughts are with his family at this time.” he said.

On her part, Brooks’ old teammate and friend, once said that Brooks was a tremendous driver, the greatest – if he’ll forgive me saying this – ‘unknown’ racing driver there’s ever been,”

“He was far better than several people who won the world championship,” he said.

As gathered, Brooks registered his first world championship victory at the British Grand Prix at Aintree in 1957, where he shared driving duties with Stirling Moss for the Vanwall team and is widely bracketed with Moss as the best British driver never to have won a Formula One world championship.

Brooks may well have been crowned world champion for Ferrari in 1959 had he not been hit on the opening lap of the final race at Sebring, United States, by teammate Wolfgang von Trips.

The formula star was said to have had a record among drivers of his era eclipsed only by five-times F1 champion Juan Manuel Fangio of Argentina, Italian double world champion Alberto Ascari and fellow Briton Moss.

He stood on the podium 10 times overall in his 38-race career, also winning the grands prix of Belgium, Italy, France, and Germany.