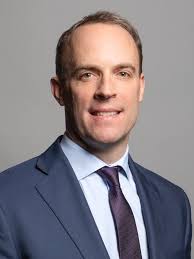 The United Kingdom Foreign Minister, Dominic Raab, has begun acting in capacity for the Prime Minister, Boris Johnson, following his being  moved to intensive care unit in a bid to cater to his worsening coronavirus symptoms.

Johnson, who had recently been moved to St Thomas Hospital over coronavirus infection, was later rushed into intensive care at the Central London Hospital in response to aggravation of symptoms being displayed by the PM.

Raab, who had been asked to deputize pending when Johnson would regain full health, expressed optimism that the prime minister was in good hands and was receiving best available medical care.

Speaking upon his arrival on Tuesday, at the official residence and office of the prime minister, Raab assured Britons that there would be no break in leadership of the country as he and his team were set to implement all directives earlier given by Boris.

He said that plans which had been made by the prime minister would be executed as had previously been agreed on, and that the people could rest assured that no instruction would be left unattended to.

“There is an incredibly strong team spirit behind the prime minister. We work as a team towards a common goal. We will implement all plans instructed by Mr Johnson and they will be delivered as soon as possible”.

Raab added that he would keep the country abreast of any changes to health situation of the PM, and expressed hope of rapid recovery being made by Johnson.