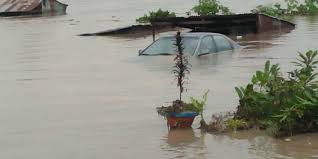 No fewer than 23 people have been reported dead while 116,000 others have been rendered homeless during flooding between June to September in Benue State.

As gathered, the 116,000 displaced persons were said to cut across 12,856 affected houses in 11 local government areas in the state.

The Executive Secretary, Benue State Emergency Management Agency, (SEMA), Emmanuel Shior, said that the agency has commenced the distribution of relief materials to displaced flood victims across the state.

Shior, through a statement released on Tuesday, in Markudi, confirmed that 116,000 persons had been displaced as a result of the flooding in different parts of the state.

He also disclosed that asides from the deceased victims, 74 persons sustained varying degrees of injuries  while 14 out of the 23 deaths recorded were as a result of boat mishap in Guma Local Government Area,

“Schools and markets, companies, houses and farmlands located in 104 communities are affected by floods that occurred during these periods in the state,” he said.

The executive secretary further stated that the flooding had so far affected 14,040 hectares of farmlands while 4,411 houses had been submerged.

According to him, the victims are in need of immediate support, and the agency started its support exercise in Makurdi and Agatu because they are the worst hit with 34 and 28 affected communities respectively.

He further said that the victims in Agatu who are currently taking refuge along the Federal Highway would soon be relocated to Obagaji.

On his part, the Principal Researcher and Rescue Officer, National Emergency Management Agency, John Digah, said that the agency had deployed a water treatment machine to support the victims with potable water.