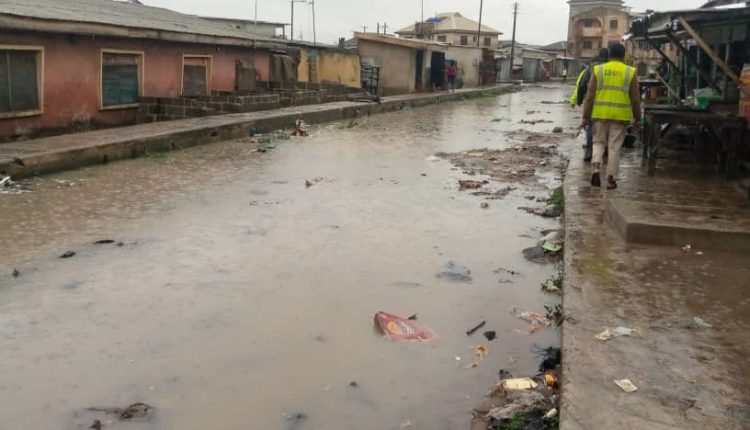 The downpour recorded in Lagos State has claimed its first casualty, a 4years old girl, that was confirmed to have been swept away by flood recorded in Orile-Agege Local Council Development Area (LCDA).

As gathered, the affected child was identified as Azeezat and was said to have been swept away when her community and two others experienced flooding caused by persistent rainfall which has crippled activities within the axis.

The three communities flooded during the downpour that lasted for several hours on Thursday were Igbayiola street, Fashola street, and Egbatedo street in Orile-Agege LCDA.

An eyewitness narrated that Azeezat fell in a ditch while trying to escape with her family when the entire community was submerged by flood minutes after the rainfall started earlier today across the state.

The Director-General of Lagos State Emergency Management Agency (LASEMA), Dr. Femi Oke-Osanyintolu, in a statement accessing the extent of flooding recorded in the community, hinted that search and rescue for the child had commenced.

Oke-Osanyintolu, who led emergency officials to the scene, blamed the flood recorded on blockage of community drainage channels leading to Aboru, Arigbanla, and Iyana-Ipaja canals.

He hinted that the emergency officials were alerted of the tragedy at about 10:30 am and that on arrival, a Post Disaster Assessment was carried out in collaboration with National Emergency Management Agency (NEMA) officials.

“Upon arrival at the incident scene in the company of NEMA officials, it was gathered from residents that a 4-year-old girl named “Azeezat” fell into a flooded big ditch/gutter while escaping to safety with her family in the wee hour of the night after their compound was submerged by flood.

“And after the Post Disaster Assessment, it was observed that three streets, (Igbayiola street, Fashola Street, Egbatedo street, were affected by the heavy rainfall.

“There are barriers blocking the drainage channels in the affected areas leading to the canals at Aboru, Arigbanla and Iyana Ipaja which could have also caused the flooded from flowing away”.