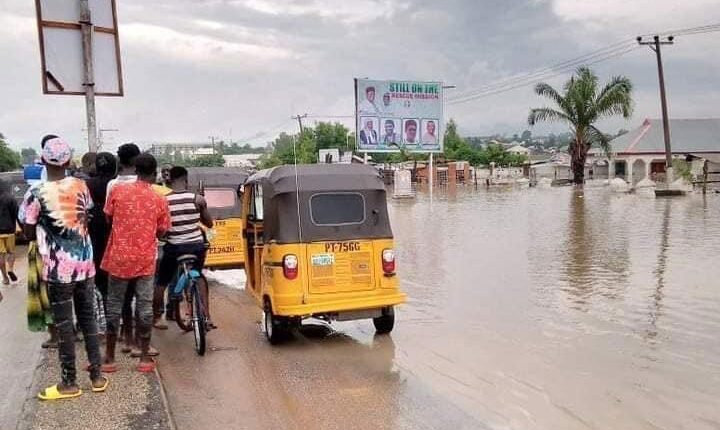 Atleast 300 buildings were reported to have been submerged and property worth millions of naira destroyed after flood-ravaged several communities in Jalingo, Taraba state capital.

Aside from affected buildings, other property belonging to residents that were said to have been destroyed include farm crops, and animals estimated to have cost several millions of naira

It was learnt that the flood occurred on Saturday after an early morning downpour in Abuja Phase 2 and Nukkai areas of Jalingo, and that the rainwater, which was expected to flow into the dam could not have access to it.

The residents further disclosed that water from a Labdo dam, sited in neighbouring country, Cameroon, was also released by the authorities few minutes after the downpour.

The Guild gathered that no casualties have been reported since the flood but residents watched helplessly as business centres, vehicles, worship centres and schools were submerged by the flood.

Some of the affected residents, meanwhile, appealed to the Federal and State governments to assist in rebuilding their homes and provide relief materials to cushion their losses.

One of the residents, Sunday Aliyu, said the disaster affected his whole community and that food item stored in houses were washed away by the flood.

Aliyu, who appealed that the state government should rescue the community from the perennial menace of flooding, called on the State Emergency Management Agency (SEMA), corporate organisations and individuals to assist the victims with relief materials to cushion their pains.

Meanwhile, Chairman of Jalingo local government, Nasiru Boboji, appealed to the Federal Government to collaborate with Cameroon, in order to intimate residents whenever the Labdo dam will be opened to avoid such casualties.

26 die, 28 others injure during Police, gang clashes in Venezuela