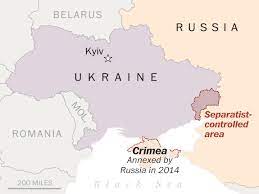 No fewer than five people have been confirmed dead while five others were left with varying degrees of injuries when a National Guard soldier, Artem Ryabchuk, shot security guards at a military factory for unknown reasons which led to the deaths in Ukraine.

Four servicemen and one civilian woman were said to have been killed by the soldier, who was armed with an AK-47 assault rifle and 200 rounds of ammunition shooting sporadically as people ran for cover.

Confirming the incident on Thursday, a police statement stated that the incident took place at the Pivdenmash missile factory in the central city of Dnipro during the issuance of weapons to guards.

Also, through a social media post, the country’s interior minister, Denys Monastyrskiy, confirmed the gunman as Artem Ryabchuk, stressing that he would  be made to bear the strictest responsibility provided by law.

Monastyrskiy, stated that a special commission would be set up by the country’s authorities  to investigate all circumstances that could have led to the crime, adding that the soldier’s act was shocking.

On his part, the Deputy interior minister, Anton Gerashchenko,  said  that the investigative inquiry would focus on the shooter’s motive, adding that investigators would also look into how the soldier passed a medical examination that qualified him to access weapons.
“First of all, the question of whether the serviceman faced psychological pressure in his team will be studied,” he said.