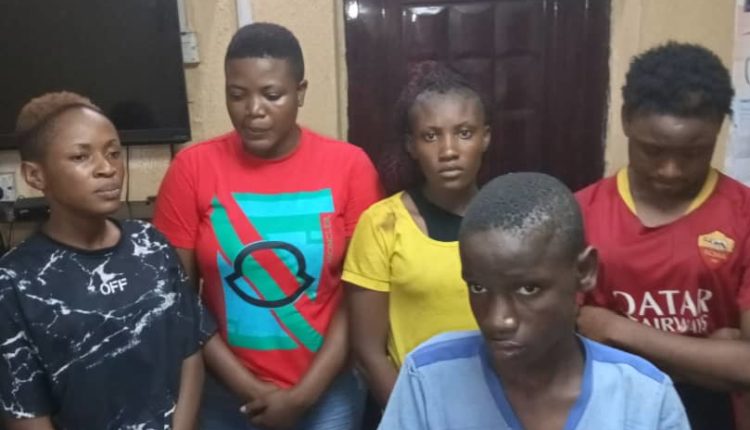 The Lagos State Police Command has arrested three teenagers and two others, who specialized stealing female underwear  after tip-of about how the arrested have also removed a new set of female pants from clothesline in Ojo Local Government area of Lagos state got to police

As gathered, the five-man gang,  includes Chukwujekwu Ezigbo, 15years old; Chidima Obietuake, 17years old; Chikwaka Chidima Jemfe, 17years old; Gold Enyinnaya, 23years old and Akomas Amarachi, 26years old, based in Ilufe Community in Ojo, were said to have been arrested after owner of set of the under wears that were removed in the community ran to divisional police station in the area to complain about how her pants had gone missing.

Confirming the arrest of the suspects on Sunday,  the command’s Police Public Relations Officer, Bala Elkana, disclosed that police arrested people at about 8am on Sunday after got information that Ezigbo had removed female underwear from a clothesline.

Elkana said: “The suspect confessed that for one year now, he has been stealing female underwear from different houses in Ojo and environs.

According to him, Ezigbo usually hands over stolen female underwear to the other suspects who sells it and pay him for his service.

The PPRO added: “All suspects have confessed to the crime. Also, Detectives have recovered some stolen female underwear from the suspects”.

Elkana assured that investigation would be intensified to apprehend those that purchase those underwear from them.