Five females, 53 others under detention for fueling Lagos-Island unrest 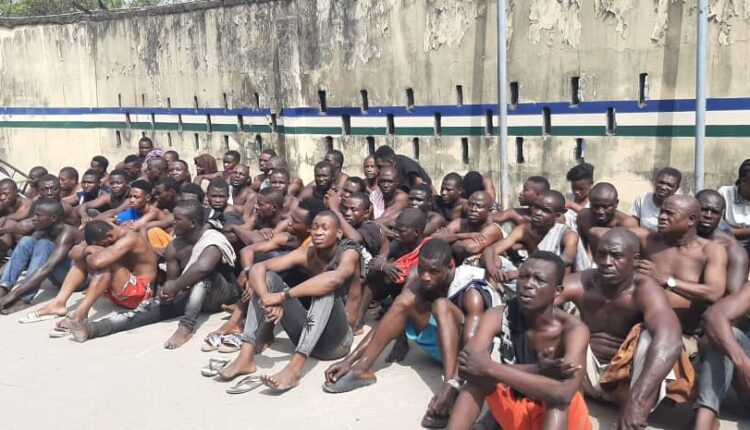 Share
In a bid to restore peace and harmony to Lagos-Island, the Nigerian Police has apprehended and detained at least 58 persons including five women that were found to be responsible for the unrest experienced within the axis of the state.
The five females under detention including two siblings were: Sharon Egiri, Idris Jumoke, Nike Idris, Adewale Adeola and Damilola Omoniyi.
And aside the ladies, four of the 53 other suspected hoodlums were elderly who were alleged to be aiding the unrest within the axis. They were: Sikiru Kareem, Kamal Olatoyinbo, Sulaimon Alaga and Musa Alidu.
All the suspects were reported to have been arrested in Agarawu, Ita Faaji, Igbosere and other areas on the Lagos Island which have been under siege of miscreants and gangsters lately, causing panic among residents and traders daily.
As gathered, before the police raided different hideouts within Lagos-Island, the miscreants and gangsters had severally attacked and damaged residents and traders properties while some allegedly lost their lives during various criminal activities.
Confirming their arrest, the Commissioner of Police, Hakeem Odumosu, directed that the suspects be transferred to the State Criminal Investigation Department in Panti, Yaba for proper investigation and onward prosecution in accordance with the Lagos criminal law.
Odumosu, in a statement signed by the Command spokesman, Olumuyiwa Adejobi, assured that the command would not relent until everyone in the state could move freely anytime without nursing any fear of been attacked by gangsters, hoodlums and others.
To ensure the arrest, the Commissioner disclosed that the  command despatched a team comprised RRS, Taskforce,  Police Mobile Force, Lagos State Neighborhood Safety Corps and other local security outfits, under the command of ACP Bode Ojajuni, the Area Commnader Area A, Lion Building, to go after the bad boys in the areas which eventually led to the arrest on Monday 8th February 2021 at about 8pm.
According to him, the command deemed it necessary and imperative to raise a formidable team to carry out sting operations on the island to restore normalcy to the affected areas.

Others under detention were: