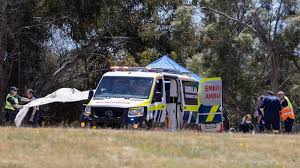 Five children have been confirmed dead while four others were left with varying degrees of injuries following a fall from a bouncy castle that was blown into the air in Australia.

The accident was reportedly caused by a wind gust which happened during a primary school fun day marking the last day of the school year in Devonport, Tasmania.

The Authorities were said to not have given the ages of the victims but said all were in grades five or six which typically for children aged 10-12.

Confirming the incident on Thursday, the Australian Police stated that the children had fallen from 10m (32ft), with both girls and boys among the victims.

Reacting to the tragedy, the Australian Prime Minister, Scott Morrison described the accident as “unthinkably heartbreaking”.

“Young children on a fun day out… and it turns to such horrific tragedy. At this time of the year, it just breaks your heart,” he said.

Similarly, Tasmanian Police Commissioner, Darren Hine explained that a wind gust had reportedly caused the jumping castle and inflatable balls to lift into the air.

“Our hearts are breaking for the families and the loved ones, schoolmates, teachers of these young people who were taken too soon” he said.

Paramedics were said to have arrived quickly at Hillcrest Primary School after the accident happened on Wednesday.

The children were said to have been given first aid before being flown in helicopters to hospital. Four children were initially pronounced dead and a fifth child later died in hospital.

Speaking to newsmen, a parent expressed states that the school had previously installed such floats on similar occasions with no problems.

“You wouldn’t dream a fun activity day would end like this,” the woman told the Hobart Mercury. We all feel so heartbroken for the parents involved. And feel guilty that we are also relieved our children were not injured.” She said.

However, the police said investigation were ongoing.