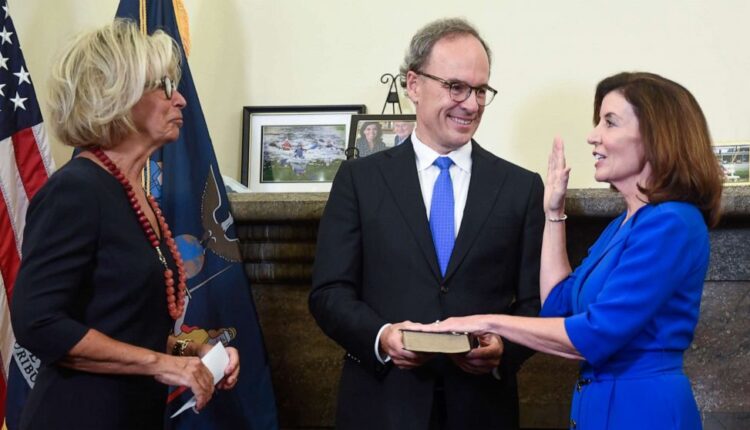 New York has sworn in a Democrat candidate, Kathy Hochul, as the 57th Governor, becoming the first woman to hold the state’s highest office after the 62-year-old was propelled from relative obscurity as lieutenant governor to one of the most powerful and prominent leadership positions within her party.

Hochul was sworn in at the State Capitol by the state’s chief judge, Janet DiFiore, in a private ceremony, after series of events that saw former Governor, Cuomo being engulfed in accusations that he covered up the true extent of COVID-19 deaths at nursing homes. Several women also came forward this year alleging that the former governor had behaved inappropriately towards them.

In her acceptance speech, Hochul vowed to lead the state through a still surging pandemic and economic uncertainty, while ushering in a new era of civility and consensus in state government.

“I want people to believe in our government again. It’s important to me that people have faith – our strength comes from the faith and the confidence of the people who put us into these offices and I take that very seriously.”

She also talked about “changing the culture of Albany. I’m looking forward to a fresh collaborative approach – that’s how I’ve always conducted myself, it’s nothing new to me, but it’s something I’ll be introducing to the state Capitol.”

Although she did not mention her predecessor by name, her remarks were implicit criticisms of Andrew Cuomo, the Democratic firebrand who was governor for a decade until he was brought down by a devastating report from the state attorney general based on sexual harassment accusations from 11 women.

Cuomo denied the allegations and departed on Monday in characteristically belligerent fashion, lambasting the report that toppled him as a “political and media stampede”. Before he left the executive mansion for the last time, Cuomo wielded his clemency powers in the cases of six men.

The most high-profile case was that of David Gilbert, who at 76 is among the last remaining prisoners for the $1.6m Brink’s robbery carried out in 1981 by members of the leftwing militant group the Weather Underground, together with the Black Liberation Army.