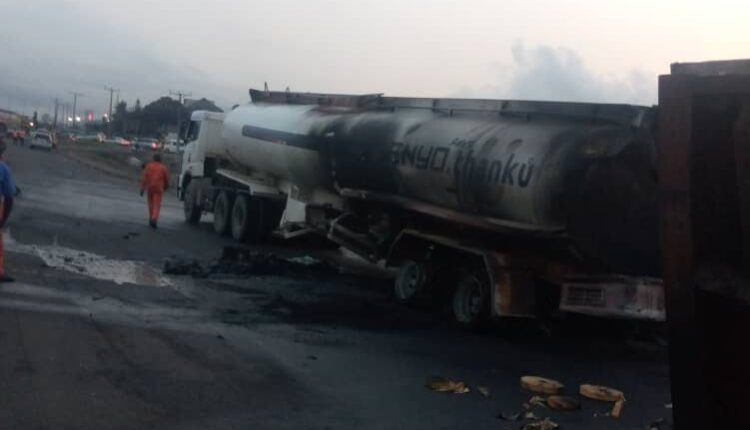 No fewer than seven vehicles were reported to have been razed when a tanker filled with Premium Motor Spirit (PMS), popularly called fuel collided with a containerised truck at the Otedola bridge end of the Lagos-Ibadan expressway.

As gathered, the incident occurred on the outward Lagos lane of the expressway and has resulted in a gridlock that had halted the movements of several motorists traveling for different activities on Saturday.

An eyewitness told The Guild that the accident occurred at about 2.30 am and that no life was lost but property worth several millions of naira was destroyed after the explosion.

It was learnt that officials of the Lagos State fire service and other emergency management agencies have doused the fire that emanated after the collision, as well as, mop-up whatever could prevent movement on the road.

Confirming the explosion, Acting Controller, Lagos State Fire and Rescue Service, Margaret Adeseye, stated that the intervention of the emergency officials assisted in preventing the inferno from spreading to Otedola Estate main gate.

Adeseye, meanwhile, disclosed that at least six vehicles were affected during the explosion that occurred at about 02: 15 am on Otedola Bridge, Ojodu Local Council Development Area in Lagos,

The Fire boss further explained that on arrival at the scene, it was discovered that the fire had already affected two 45000-litre tankers conveying Diesel, two flatbed trailers with one carrying a 40ft container, one Mazda car and one container truck.

She disclosed that the firefighting operations started immediately to curtail the inferno from causing more damage, thereby preventing one 45000 litres tanker from being completely burnt.

While saying that the cause of the fire is still unknown as investigations were ongoing, the Acting Head of the Fire Agency confirmed that no life was lost in the incident.

According to her, all hands are on deck to restore normalcy to the axis with assistance form Lagos State Emergency Management Agency (LASEMA) and other emergency responders.