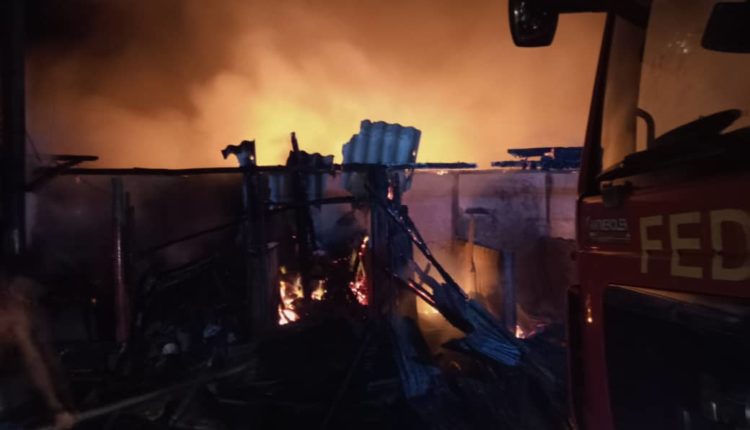 Share
By Monsuru Olowoopejo
For traders at Olaleye market in Shomolu Local Government, it was the worst possible way to return fully to business when a mysterious fire gutted the market and destroyed goods worth several millions of naira on Saturday morning.
The traders, who were just beginning to get on with the odd and even trade days system imposed by Lagos State Governor, Babajide Sanwo-Olu, after President Muhammadu Buhari lifted the lockdown earlier imposed on Lagos and others to flatten coronavirus curve in the country, were shocked to find out that their market has been razed by fire.
At the time when the fire started, aside from Olaleye market security personnel and a few traders who live closer to the market, several others who were informed by the tragedy that befell them could not wait for the curfew imposed by the state government after the the Federal Government lifted lockdown to elapse before racing to the scene with the possibilities of recovering some goods.
The Guild gathered that the fire currently been battled by officials of the Lagos State Emergency rescue team including the fire service started a few minutes past 3:00 am at one end of the market before spreading to others.
Confirming the development, Public Affairs Officer of Lagos State Emergency Management Agency (LASEMA), Nosa Okunbor, hinted that efforts were ongoing to curtail the fire from spreading beyond the market.
While stating that no life was lost to the inferno nor injuries sustained, Okunbor hinted that properties and goods worth several billions of naira have been razed during the inferno that occurred at the early hours of the state.
“LASEMA Response Team received a distress call from control room as regards a fire outbreak at the aforementioned location and immediately deployed to the incident scene. And upon arrival at the scene, it was discovered that Olaleye Market located at Shomolu was gutted by fire. However, an investigation is currently ongoing to ascertain cause of the fire.
“Lagos State Fire Service, LRU fire and the Federal Fire Service are currently battling the inferno and preventing it from spreading to other residential buildings. No life was lost and no injuries sustained, but properties and goods worth several billions of naira is currently being razed down by the inferno”.

Burkina Faso national, 250 others under detention over illegal mining