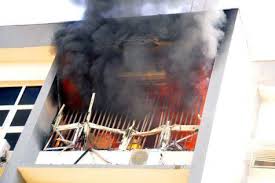 The Independent National Electoral Commission (INEC) office has been razed by a fire that broke out at the commission’s headquarters and destroyed various equipment and staff belongings which were in the building.

The Guild gathered that the inferno, which started in early hours of the day, had gutted the commission’s Election and Party Monitoring Department (EPM) as well as destroying some personal effects in the Voter Registry Director’s office.

Though cause of the fire was yet to be determined, INEC National Commissioner, Festus Okoye, assured Nigerians that no vital documents had been lost to the inferno.

He expressed appreciation to the emergency respondents for the promptness with which they dealt with the fire outbreak and stated that the incident had not left any negative effect on the commission’s capacity to carry out its functions adequately.

Okoye added that investigations were being carried out to determine cause of the fire, and said that results of findings would be made available to the Nigerians by the commission.

“The fire started at about 10:30am and was quickly put out by a combined team of firefighters from the Federal Fire Service and the FCT Fire Service; assisted by officials of the National Emergency Management Agency. Apart from office equipment and the personal effects of the Voter Registry Director which were lost to the fire incident, the operational capacity of the commission has not in any way been affected”.