Over 700 Central American gang members under detention in… 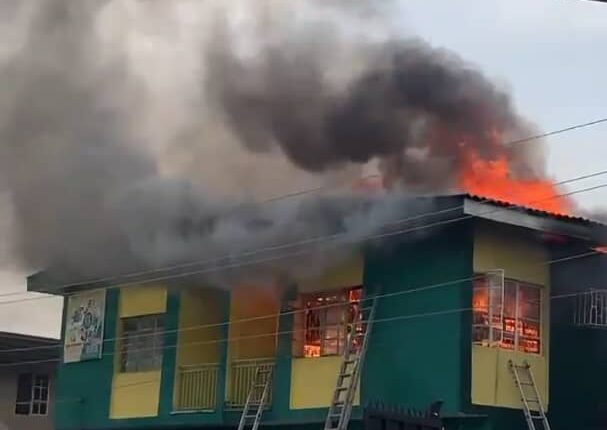 The residents of Glory Estate in Ifako-Gbagada axis of Lagos State were on Tuesday enveloped in fear after a school building within the community suddenly went up in flames, destroying property worth millions of Naira

As gathered, the school, Pure Seed Montessori, nursery and primary school, sited on 4 Oladunni Street, Glory Estate, was said to have been gutted by fire at about 4:00 pm.

The guild learnt that the fire started when occupants of the building in Kosofe Local Government were still at work and that it had attracted several residents and passers-by that could not understand reasons the house went up in flames.

The fire was said to have emanated from a flat and had spread to other parts of the building minutes after occupants of adjourning buildings raised the alarm that fire had gutted the building.

Eyewitnesses said that the alarm alerted other residents of the community to the scene and some to make calls to Lagos State emergency officials for help.

While waiting for the fire service officials, The guild learnt that residents that witnessed thick smokes oozing out from the building sourced for water to put out the fire that was raging.

Confirming the development, Ag. Head of the Lagos State Fire and Rescue Service, Margaret Adeseye, said that the fire has been put out and that the officials from Isolo and Bolade stations were deployed to the scene for rescue operations.

Adeseye, who disclosed that the cause of the fire was unknown, added that one male adult sympathizer sustained minor injury and that he had been treated and discharged at a nearby hospital.

According to her, a distress call was received to 4 Oladunni Street, Glory Estate, Ifako-Gbagada, Lagos and on arrival it was discovered that a twin duplex which a section is residential was on Fire.

The fire boss, through a statement by Head, Public Affairs, Jamiu Dosunmu, explained that the fire was only contained after the it was confined to the upper floor of the building where it started while salvaging the building and adjoining property.

Navy hands over 22 oil bunkers, others to EFCC