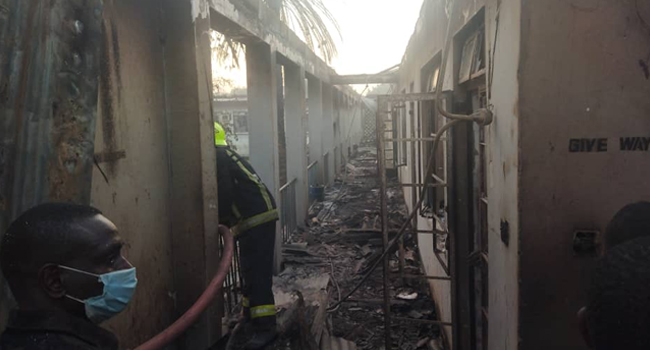 Fire has gutted the first-floor administrative block of the Kano Police Command headquarters, disrupting and destroying property worth millions of Naira.

As gathered, the fire, which was put out severai minutes later, started from electrical plug after it sparked following restoration of power supply into the police building in the state.

The spokesman for the Kano State Police Command, DSP Abdullahi Kiyawa, who confirmed the development on Saturday through a statement made available to newsmen, said that there was no life lost during the inferno.

According to the statement, “Today, Saturday 14, January 2023 at 11:00 am, we woke up to this bad incidence of fire outbreak at the Police Headquarters in Bompai on the first floor,” the spokesman of the Kano State Police Command DSP Abdullahi Haruna Kiyawa said.

“No life was lost. Our records are also intact and those we have locked are also intact because the fire did not affect the area they are kept. We are suspecting that the incident happened due to some electrical problems but we have already commenced an investigation.

“You can see the top part of the building has been burnt. It is only the Commissioner’s office that has not been affected as well as those on the ground floor.”