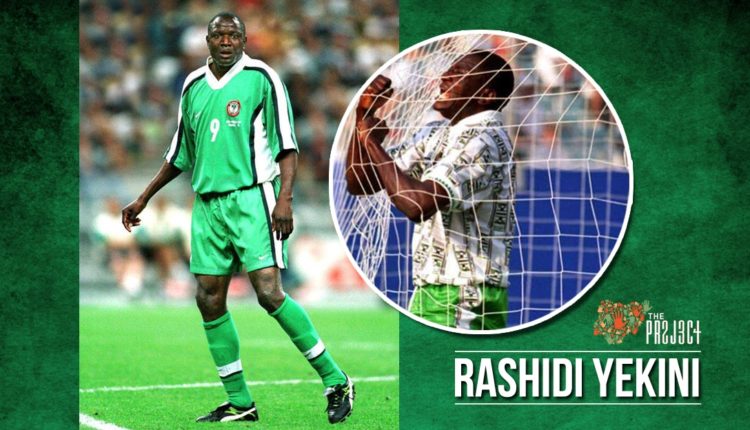 Yekini, who passed on May 4, 2012 at the age of 48, in his Ibadan house, Oyo State, plied his trade locally and internationally and assisted the country to qualify for its first world cup hosted in United State in 1994.

To eulogies the late striker, FIFA posted on its World Cup Twitter handle, with a picture of Yekini’s celebration after netting Nigeria’s first goal in the competition in 1994, describing it as one of the most iconic goal jubilations in the tournament’s history.

“Rasheed Yekini produced one of the most iconic celebrations in #WorldCup history after scoring the @NGSuperEagles’ first-ever goal in the competition,” said the football body. Africa sadly lost its greatest-ever players #OnThisDay in 2012, but his legend will live on eternally.”

“Today we remember one of the World’s most feared strikers of his time, Rashidi Yekini who passed on to glory on this day in 2012. May his soul continue to Rest In Peace,” the NFF wrote on its official Twitter handle.

His former teammates, Mutiu Adepoju and a former Super Eagles captain and coach, Sunday Oliseh, reminisced their days playing together for the national team.

“8 years ago today,” Oliseh tweeted, “we lost Nigeria’s greatest striker of all time in Rashidi Yekini. May his blessed soul rest in peace.”

In a eulogy to the late footballer, Adepoju who was called the “Headmaster” in his playing days, recalled how Yekini rescued the team in difficult times.

According to a series of tweets on his official Twitter handle, he described playing alongside the former Vitoria Setubal goal poacher as an honour, adding that Yekini gave his all for the country.

“Whenever we seem down and defeated, you always conjure your magic wand and get us out of trouble with your goals. It was never a dull moment with you in camp as everyone’s ribs would be cracked at your jokes.

“You were never a contentious person and you saw everyone as your brother not minding their backgrounds. I will never forget you, Nigerians will never forget you. Always in our hearts. Rest in peace king Rasheed Yekini. You were created to score goals and your class remains unmatched!”

For an ex-Ghanaian defender, Anthony Baffoe, the former Abiola Babes star was one of the continent’s most dreaded strikers.

Baffoe tweeted: “One of Africa’s most terrific strikers Rashidi Yekini -today marks his 8th year of leaving us. Continue resting in peace Rashidi.”

The late Yekini was born in Kaduna and began his football career in the Nigerian league where he featured for teams like Abiola Babes, Julius Berger, and Gateway.

His stint abroad saw him lining up for Africa Sports National of Ivory Coast from where he teamed up with Vitória de Setúbal in Portugal and emerged as Primeira Liga’s top scorer in the 1993–94 campaign.

He struck 21 times during that season and went ahead to play for Sporting Gijon, Olympiakos, and FC Zurich.

Yekini made his senior debut for Nigeria in 1984 and went on to net 37 goals in 58 matches – the highest so far in the country’s history – until his retirement after the 1998 World Cup.

At the Senegal 1992 and Tunisia 1994 AFCONs, he scored four and five goals respectively, to emerge as the top scorer. Yekini was a member of the Super Eagles side that played in the 1994 and 1998 World Cups and also featured in the 1988 Seoul Olympics.